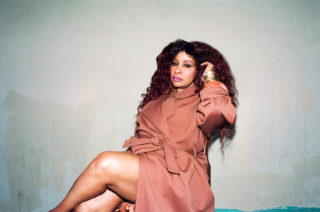 Chaka Khan is a singer. At least, that’s her job. When she’s not doing her job, though, she’s a grandmother (and legal guardian of her 18-year-old granddaughter) and a TV fan called Yvette Stevens, with no interest in taking the office home with her. Indeed, she uses the language of addiction to describe how she interacts with music, chastising those who give in to “the itch” of constant listening and playing, and preaching the virtues of abstinence.

Not that it’s always been that way. Over the past five decades, the balance between Khan’s personal and professional lives has been more unsteady: from the effervescent funk of Rufus and ‘Ain’t Nobody’ to the groundbreaking Prince collaboration ‘I Feel For You’, and into the new century as a diva house touchstone, Khan’s life has been marked by both serious substance addiction and exploitative record contracts, to the extent that she holds a clear scepticism of her biggest songs, resentful, as she sees it, of having had greatness thrust upon her.

It’s a situation that leaves her alternately prickly and proud in conversation, reminiscent (perhaps appropriately, and entirely understandably) of a survivor of a traumatic past: the focus of her tangential speaking style is self-affirmation coupled with mild indignation at those around her, all at the expense of much in the way of empathy or dialogue.

Over a crackly phone line to Amsterdam, where she’s just flown from LA to play a private show, she’s reluctant to engage on all but the most superficial aspects of her music, talking only briefly about her latest project, the excellent, uplifting and rather moreish ‘Hello Happiness’, which she completed with songwriter Sarah Ruba and producer Dave Taylor, aka Switch from Major Lazer. “I’ll be interested to see if you ask any questions that I haven’t heard before,” Khan pre-empts me before we start. After our half-hour is up, I wonder if she had any intention of listening to them in the first place. 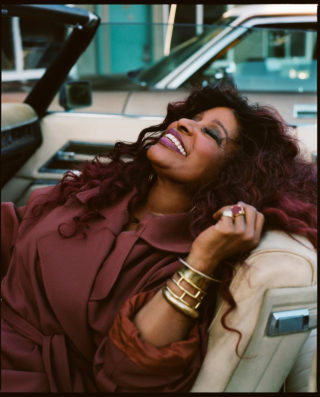 I just sing. It’s what I do for a living.

I sing in a studio, I sing live on stage, I don’t mind where. I just like to sing, period. I like to sing good stuff, okay? I don’t care if it’s for an audience of one, or none, or a million. If I’m going to sing, I want to sing stuff that I love to sing. In the past, I’ve had to sing stuff that, shall we say, I didn’t love. I didn’t love ‘I Feel For You’, but it’s not just that one. There are 25 or 30 songs that I feel like that about. I didn’t pick it, and I’d have never picked it to be a single, but that’s why I’m not picking singles! In the era of big labels, I had to stick to a formula, which I didn’t really appreciate, so I’m glad I don’t have to deal with that crap anymore.

After I’ve done my vocals, I don’t want to be around – it’s as boring as anything.

On this album, how it worked is Sarah and Dave played me tracks, I picked the tracks I liked, we recorded my vocals, and then they did their mixing or whatever. I don’t really know how they put it together – they sort through the vocals and pick what’s going where, and it’s crazy: they’re building a song as opposed to singing a song. They find great excitement in that, but for me it’s all terribly boring. I just want to go in there and sing. So I put my vocals down and it turned out magical.

For me, all musicians and artists speak the same language.

It has nothing to do with where they’re born, you understand? Nothing to do with their country. We all speak that one language, the language of the angels, meaning I can sing pretty much anything! Obviously, I’m a multicultural singer: I’ve sung in German, in French, I’ve sung in many languages, but music is one common language. For example, I just finished a song for Gandhi’s birthday celebration, in Hindi, I think, or whatever language it was [it was in Gujarati]. Anyway, singing in Hindi is a totally different discipline – I felt like a spaceship had landed from a different planet – but the one common thread that I hung onto is that it was a prayer song, so that got me in the right mood. I had a singing coach with me for the correct pronunciation of the words, but it turned out beautifully.

I don’t listen to music at home, I don’t sing at home.

When I’m home and I’m off, I’m off. I don’t have a studio at my house, I just do the telly. Me and the telly, and family, that’s it. When I go on the road, I do music. When I have to – when it’s time, whenever the occasion insists – I go in and I put down music, but it’s my job, so I don’t overdo it, which keeps it fresh. I don’t want to get bored or tired of an art that is so unique and pure, or drag it in the dirt, know what I mean? Some people get the itch, and then lose the love and respect for a thing, and when that happens, everybody knows. But the way to remain in love with music is to abstain. I don’t have music at home, or go out to clubs and jam every night. I pay as much respect to the non-singer in me as I do to the singer.

Singing is not me putting on a mask.

It’s just me, I don’t put on any fake gloves or costumes or any fake anything. I’m the most realistic, real person – one of the most real that you’ll ever probably talk to. I’m all about truth – it’s at a premium these days and I’m all about honesty, and with the living I make, I’m like a carnival trying to bring honesty – honesty in a carnival setting. Sure, Chaka Khan is a stage name, and absolutely there’s a difference between Chaka and Yvette: Yvette’s the bass note, she’s the one who brought me through all the crap. She’s the strength, so when I go home, I hang Chaka Khan in the closet, and I become Nana, and Yvette.

I’ve been a Joni Mitchell fan since I was a teenager.

I’m drawn to her intelligence, number one; her lyrics are off the chart, she’s so honest and real, and she tells stories, paints pictures with her music. She’s a visual singer, and I love that. She’s the first songwriter that sent me to a dictionary – which says a lot, by the way – so I just respect the hell out of her. I love her choices, and her style, and her music, and I love the way she sings and plays guitar and piano. She’s remained true to herself musically, and not let anyone else influence her to the degree where it’s stressed out her music, or reshaped it or recoloured it into something that’s false or fake, or something that will appeal to the “popular ear”. 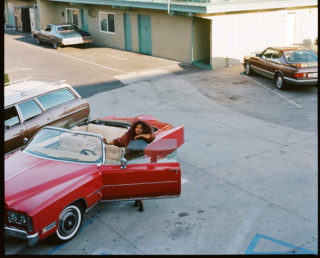 I’m just finishing up a CD of my tribute to Joni Mitchell, my favourite songs of hers.

What are they? I’m not going to go down the playlist for you, honey – just put that they’re my favourite songs, okay? I just picked ones I love – ‘Hejira’, ‘Man from Mars’, ‘Two Grey Rooms’ – and there are a hundred others I love too. But Joni and I are friends, and I have her blessing, and I’m running everything by her before it’s released, and that’s that. When you hear my takes on her songs, I think you’ll be impressed. You’ll really like it.

I grew up listening to a lot of jazz.

My dad was an avid jazz fanatic, and named me after a Stan Getz song. My mother was into jazz too, and opera, and everything in between – Miles Davis, Curtis Mayfield, Charles Stepney, The Rotary Connection – so I have a very rich musical history, but jazz, that’s my foundation. It’s higher-mind music, it’s esoteric music. I like to call it thinking-man’s music. It’s intelligent stuff, and that’s why I love it so. It appeals to my intellect, and to my musicality, and that’s a win-win for me in a big way.

Before that, I wanted to be a botanist, or a biologist, or a lot of things, but I ended up running away from home and joining a band. I still love science, and I have a garden at home, so if I decided I wanted to get a degree in botany, I could do that easily. You can go online now – if you can read, you can teach yourself, and you can learn.

I used to be in the Black Panthers, but I’m not an activist anymore.

I’m not a pacifist either, though, okay? I just happen to know exactly what politics is, and what kind of people are keeping poor people poor, and the rich people rich, and I don’t even want to be associated with this madness and this sickness that is politics, okay? So, I have no love for what Man is, but I’m not going to go back out on the streets with a gun and start shooting people, or any shit like that, because that’s not the way to fix things.

The thing I liked most about London originally was the fact that the bobbies don’t carry guns. I thought it was very humane, and speaks volumes. I loved the weather there too. Not everybody likes rain, but I love rain because I love weather – it moves me and inspires me. I hate the weather in LA because there is no weather in LA!