'Tschak!' was made without any mind-altering substances whatsoever, under quite extraordinary circumstances

“Being in prison was quite a psychedelic experience,” says Gnoomes’ vocalist and bass player Alex Pyankov, speaking from his home in Perm, Russia. Despite rather obstructive hurdles like imprisonment, his band have just released their second album ‘TSCHAK!’ via Rocket Recordings, a label that is home to various incarnations and miscreants of psychedelia and esoterica, such as Goat, Teeth of the Sea, Hey Colossus, Gnod and Hills.

Gnoomes – a three piece consisting of Pyankov, Pavel Fedoseev and Dmitriy Konyushevich – released their first album on Rocket in 2015. ‘Ngan!’ is a four-track album (two of which take up 30 minutes alone) that burrows deep into the elongated groove template of the psych genre. Through its explorations in repetition it allows ripples of guitar to push and pull the momentum in porpoise waves of swelling sounds, like an extended Slowdive mix at times: rich in texture, dense in atmosphere and with a quiet charge of euphoria trying to pierce through the thick fog of drones that tower above.

For album number two there is a distinctly more electronic presence, one that erupts in gusts of industrial-tinged brutal noise, whilst other moments ooze in flowing and seamless melodies, with the album shifting from synthpop harmonies to dungeon techno, to cosmic disco in a matter of minutes.

It’s a far more corporeal experience than their debut, much more immersive and heady in its wildly chaotic pull, yet this album was made without the assistance of any mind-altering substances whatsoever. “It was a challenge to create an album of psychedelic music without psychedelics,” Pyankov says of the sober experience, “but it proved great for us as musicians because we had clear minds.”

The forced removal of substances that so clearly defined the recordings of their debut was due to the band’s arrest and incarceration. “We weren’t doing anything,” insists Pyankov, “we were just walking down the street. We were a little bit high and the police stopped us. It later said in the report that we were apparently looking suspicious because we had denim jackets and hats on.” The police forced the band into their car and made them take urine tests, which they failed as they had smoked some weed. “We were put in prison for five days for being high. It was crazy.” Pyankov says this with a tone that is half laughing and half despondent. Despite it only being a short period of time he says it “felt like an eternity in there.” They are now all expected to provide regular monthly drug tests, which they have to pass “to prove we’re not drug addicts.”

Pyankov himself was nearly plucked away from the band altogether for another reason before ‘TSCHAK!’ was made. “I was a postgraduate student – I’m a historian,” he tells me, “and when I was finishing that the Russian Army said, ‘hey man, it’s time for you to serve,’ and I was like, ‘really? Oh no!’ I have some problems with my health and I successfully managed to avoid having to go in.”

It’s a mandatory requirement for all Russian men to serve at least two years in the Army between the ages of 18 – 27. “It doesn’t matter when, you have no real say; they just decide it’s your time. Lots of teenagers just hide, they play hide and seek with these guys but sometimes the police can come looking for you and pick you up. You just have no real choice. There are some extenuating circumstances, like if you’re in the middle of studies at University, or if you’re gay then you’re not allowed to serve, but you have to prove it.”

My following question is of course, how do you prove you’re gay?

“I don’t know exactly,” Pyankov tells me with a bewildered laugh. “I think they examine your body or something like that.”

Despite near misses with the law and the army, Gnoomes finally bunkered down in a studio to record. They were located in a giant old Soviet-era radio and TV station building that Konyushevich also DJs at. “On this album we wanted to be isolated,” says Pyankov. “We decided not to involve people; we wanted to create an album that was purely us from start to finish. Thankfully we had a rehearsal space in one of the ancient studio rooms from the ’70s, so we decided to make a record in that space. We found lots of soviet synths that sounded very crazy.”

These discovered synths would lead to the tone of the record being shaped. During the Cold War, Russia and U.S.A became embroiled in manufacturing races of all sorts, which even extended to battles in technological advancements through musical instruments. Whilst companies like Moog began to lead the way and shape the future of music in this area, Russian inventors tried to one-up them, often failing and producing an array of rare and bizarre creations that whilst wildly unpredictable and require constant tuning, also give off distinctly wonky, and often unrepeatable sounds.

Gnoomes embraced these antiquated machines they found gathering dust and allowed them to bubble, hiss and gargle their way through the album. “We wanted this album to sound more electronic and we wanted to use the synths because of this weird analogue sound they gave off,” Pyankov explains, which at times sound like they are being transmitted from a bygone era, channelled in through a static hiss, whilst others retain a purity and blinking tone that sounds entirely futuristic. It’s perhaps here where Gnoomes most successfully lock into their own groove on their latest LP, merging the past and the present: capturing the ’80s wash of genres such as cold wave and the whiff of oddball electronics reminiscent of Silver Apples, whilst in other moments they feel like they are hurtling into other stratosphere, intent on leaving the past ablaze in their tracks.

Pyankov himself also feels like this album is the one in which the group have cemented their own personality and forged their own sonic identity, for now. “It was fun just to breathe out and feel ourselves,” he says. 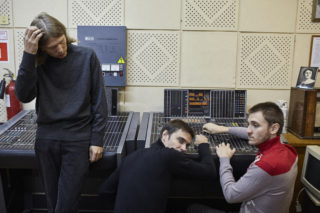 Whilst Gnoomes’ deeply exploratory yet accessible and infectious sounds slot tightly into a resurgence of German-influenced alt-psych currently growing in the UK, they don’t have as much luck winning over audiences back home. “Psychedelic music is not an interesting phenomenon to Russian people,” Pyankov says with a slight sigh and lick of irritation in his voice. “They don’t really want to hear it. It’s frustrating but we’re used to the situation. We love touring outside Russia. When we went to the UK for the first time it was great – people wanted to buy records, speak with us, to actually be into our art. In Russia people just don’t care.”

There was a time when they did win over their fans at home, he says, but that was when Pyankov was younger and playing in covers bands. “We were playing some Britpop songs like Oasis and Blur,” he tells me. “It was quite a big community of people who loved British music in Perm, groups like the Smiths. After that I met our drummer and we played in a garage band and the garage scene was big too. There were plenty of bands that played that style of music but now the scene ceases to be; kids grew up and got jobs and have become adults and don’t want to be crazy any more.

“There’s lots of Russian rock music… I don’t know how to explain it but it’s quite similar to Polish pop or Eastern European pop – music with strong ideologies. There’s also a lot of metal going on: black metal, death metal, people are suffering here and they just want to reflect their feelings in the music.”

When Pyankov naturally grew out of and moved on from the Britpop covers and primitive garage bands, he didn’t see others follow. “We played lots of gigs in pubs and got drunk very, very often but our lifestyle changed. We started becoming more isolated from society and from people because we felt that we had to move on. We wanted to do our own thing and it became a point of no return. We started to create very personal things.”

Aside from wanting to leave behind an aspect of their lives they were outgrowing they were also hit by an influx of new music that changed their outlook entirely. Influenced by krautrock, techno and the consumption of the entire Warp back catalogue, Gnoomes soon grew into a mutated beast of their own and with fans lost in Russia they’ve only gained more in the UK and Western Europe as time has moved on, with their mantra remaining a simple but effective one. “We just want to show our lives, our souls,” says Pyankov. “And what’s going on here.”

MU!? More like Neu! This is Gnoomes’ most confident release to date

In a remote part of Russia, KIKOK has made an EP that sounds like My Bloody Valentine doing Italo disco

Russian psych band Gnoomes have been through A LOT to make their second LP, listen to the whole of ‘Tschak!’ here