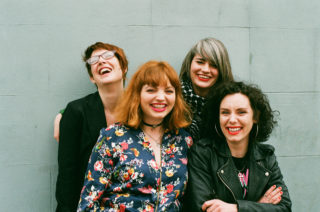 "It's about self expression - and about being a bit naughty"

“I think the nature of ILL is persevering through chaos,” says singer and bassist Whitney Bluzma, in an accent that melds her Latvian roots with a Northern drawl that a decade in Manchester will land you with. “We’ve survived through several hiatuses and two band members leaving.”

This persistence is being celebrated as I arrive in a giant industrial building in Manchester where the group rehearse. ILL are locked into a celebratory embrace, beaming with pride as they cast eyes across the finished vinyl copies of their debut album. Along with words of encouragement to one another, the sound of a band rehearsing can be heard thumping through the floor as the distant chants of Manchester City fans at the Etihad Stadium creep through the windows.

It’s been six years since ILL formed and so their debut album is a landmark accomplishment. Recently released on Box Records, it’s an album that does more than justice to some of the searing live shows they have been playing over the years. It’s a potent blend of jagged post-punk, clattering psych rock, acrid glam, riot grrrl snarl and doom pop, all loaded with socio-political bite and ink-black humour.

The band was born, quite literally, from the womb. Many of the members made up the improvisational collective, Womb, before forming ILL. “Womb was cool to connect with all these women but rarely did it ever sound like music,” keyboard player and singer Harri Shanahan says. “It was very congested and noisy. So we thought it would be nice to do something where we had the space to hear something.” 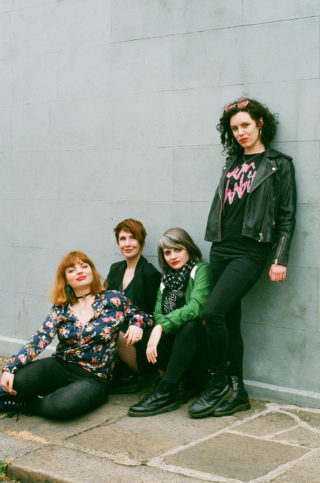 For the band’s first ever show, they were wrapped in bandages, depicting an exaggerated image of their supposed illness. “The band name came from initially just being dismissed as being ‘ill’ because of what we were trying to do,” says Bluzma. “So we took it as a badge of honour rather than a slur.” Their debut album opens with ‘ILL Song’ and the opening lyrics of “putting a stress on the NHS”. The frenetic energy, screeching guitars and demented house of horrors keyboards perfectly aligns with the screams of “take your pills, take your pills.” A version of this song existed for the first ever show and was also something of a mission statement for how they would unfold. “I’ve always had a bee in my bonnet about mental health services and how women are treated, specifically,” Shanahan says. Along with a sort of operating room gone berserk aesthetic the band employed in the early days, their previous member Rosanne Robertson could also be found utilising everything from saws to vibrators as part of their genre-colliding sound.

The band soon came up with the term “disobedient noise” to describe what they do; a description initially born from having to write a bio that soon bloomed into something of a mantra. “For me, that term means being a woman and being loud and openly emotional and full of rage,” says Bluzma. “Growing up in Latvia, and I think this is often true of women as a whole, you get told to be quiet and polite and don’t argue with people. Or if you get bullied then to stay quiet.” This is something Shanahan echoes in terms of her UK-based life. “My family background is super religious and conservative. So I think we’ve all come up against that obedience: at home and at work, in various ways.”

So ILL became a liberating front for disobedience, noise, fun and chaos all rolled into a juddering purification you can move to. “It’s about self expression,” offers Shanahan, “and about being a bit naughty, but we do like people to have a good time. It’s not all inquiet fury, it’s inquiet fury attached to hopefully danceable beats.” Humour is also rooted into the band’s output. Even a cursory glance at titles such as ‘Space Dick’ will allude to that before you hear the lyrics. Likewise on the sludgy Swans-like growl of the hilarious but brutal ‘I Am the Meat’, with its exploration of objectification and lyrics like, “Skinny pudding-fucker / I am the meat.” Shanahan wrote the lyrics in response to “when someone said that the real meat would come from the male bands playing this gig we were on the bill with. I was like, ‘no!’ we’re the meat – we’re meaty.”

Anger and humour have an equal role in the band. “It’s fury modulated by sarcasm and jokes,” says Bluzma. Whilst Shanahan adds, “I have to laugh otherwise I would cry and probably stab people. Humour is a great thing and when people understand the joke and are able to laugh at themselves and the wider world, it can be quite a protective thing. Empowering almost.”

Whilst the band tackle social, political and gender inequality in their songs, drummer Fiona Ledgard says: “I think it’s really important not to take ourselves too seriously.” She then goes onto to recall what in most bands lives would have been a disastrous gig but one they managed to turn into a riot. “We played in Bury in a Wetherspoons-type bar and it was just full of old men. They left the horse racing on the TV whilst we played so we started doing commentary over it. I looked over and one elderly man at the bar was just stuffing screwed up tissues into his ears.”

Shanahan then throws in an anecdote: “I remember playing one gig in Oldham and this guy just tapped me on the back and I turned around and he just said: ‘shite.’” But bad, or funny, gig stories aside, there’s still a fundamental point the band are both making and extracting from such encounters, as Ledgard explains. “I think as women it’s important that we take up space and make noise. A lot of people might not like that and it can still be a shocking or surprising thing for some people.” 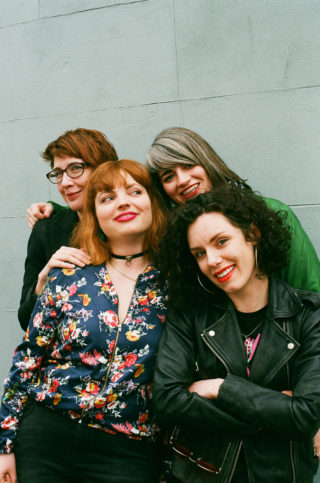 A sobering realisation amidst the disordered assault of ILL is that the subjects in the songs they wrote as far back as five or six years ago are not only still relevant but have worsened. Ledgard says: “A lot of the lyrics focus around government cuts to welfare, mental health services, the NHS, arts, education. And it’s like…what’s next?” The premonition-like capabilities of the band’s songs is not lost on Shanahan either. “I sometimes feel like you write a song and it becomes true,” she says. “Like with the song ‘Kremlin’; we’re talking about perverts in Congress. Then this happened with Trump and it feels a bit like what we write about comes true. So the next song that we’re going to write is called ‘Free Pizza and Cake For Trans Women and Lesbians.’”

Whilst none of the band have any faith whatsoever in the current government to make changes in any positive and progressive way, they do have hope on a smaller scale. “Community is really, really important,” Ledgard says, “and more people are noticing that now. There is a huge sense of community that comes from music – from different scenes in different cities – there’s a support network.”

Shanahan says that if ILL can make someone feel even a little bit empowered then their work is being done. “It’s about being a cog in a larger machine,” says guitarist Tamsin Middleton, with Shahanan concluding: “We’re not going to change the world with a song, we’re not that naive, but even venting a bit is good for you – you’ll live longer. It’s medicinal catharsis we’re giving people.”