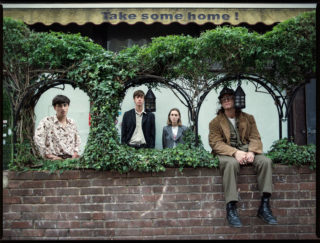 The band FKA Fish are midway through a Fish related story, involving the guy Fish from neo-prog band Marillion. “So it turns out the photographer Dan’s uncle was in Marillion with Fish, which is just weird,” say the ex-Fishes. What a coincidence, I say, internally piecing this fishy jigsaw together. Asha Lorenz and Louis O’Bryen have become proficient at telling the story of how their band went from being named you know what to Sorry but an afternoon with our photographer has them spinning. “We had to change our name because of him,” Louis explains. “Apparently he doesn’t really make music anymore but he’s got a really strong following.” It was Asha who was first targeted online. “One of Marillion’s fans messaged me saying how dare you call yourself Fish. They were like, ‘the real Fish has 35 years under his belt!’”

Sorry have just two, and a long way to go before they reach Marillion’s freaky fan status, but the band’s two core members have known each other for most of their young lives. “Me and him have been friends for, like, 10 years,” smiles Asha, almost tripping over words as she speaks.

“We were at secondary school together, so it’s been like a reaaaaallly long time,” says Louis, blocking a well-timed dig to his arm from Asha. “We used to be in a covers band at school for a bit as well.” Asha seems embarrassed the topic’s been raised. “I think we actually did ‘Cheating’ by John Newman,” she says with a wince. “We did Jimmy Hendrix’s ‘Hey Joe’ as well. We were like 14 so this was straight as.”

Since then the two of them have evolved into something entirely different. Non-linear bedroom grunge has replaced down-the-line covers and alongside new members (Lincoln Barrett on drums and Campbell Baum on bass) Sorry’s complex, layered songs now have a driving rhythm section and a life force of their own. Recent demos ‘Drag King’ and ‘Prickz’ provide a glimpse of what’s to come: Asha’s stuttering, spoken word vocal whirs to life over stop-start de-tuned guitar, everything in its right place… but not. The music pleasingly off centre in a very deliberate way. “If it doesn’t sound dis-coordinated or slightly off then I don’t like it as a song,” says Asha. “Louis and I both have similar taste like that. To me, personally, it doesn’t make sense if it’s perfect.” 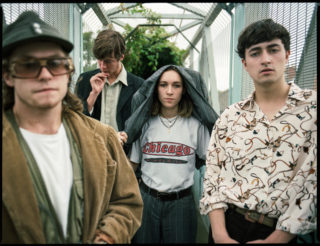 On the surface what you have with Sorry is more crossover grunge, another band harking back to 1990 whatever, but it’s clearly much more. Really. “We love hip-hop,” Louis tells me. “I went through an angsty teenage phase where I just listened to hip-hop and that’s it.”

“He found this mixtape by Pro-Era called ‘The aPROcalypse’ and we both listened to it religiously for, like, a year and a half,” says Asha.

“Yeah it’s actually one of my favourite albums ever. They have a really cool rapper called Capital Steez – he is my favourite. I got really bored of music at one point and when we started making songs on the computer again it made it much more interesting. That’s what we are going to try and focus on for the future, getting the balance so it’s not so rocky. It’s not that we don’t like rock music at all, it’s just a mixture and another side to the sword… is that a saying? Another side to the dice… no, I don’t think that’s a phrase either.” Asha rolls her eyes.

“That’s what we are trying to do with the band,” she agrees. “I don’t really like any of the studio recordings so far as I don’t think it captures any of the same stuff as our home recordings – the mistakes you make, it feels more cathartic at home than live or at the studio, so we are trying to work on that. We are just attempting to find the balance between all these things and influences as we are trying to infiltrate Sorry onto the radio, not that we care about that!”

If they’re going to break the airwaves then Sorry need to look no further than their South London peers. Despite living in northwest London, they’ve been strangely grouped into the South’s burgeoning scene, counting the likes of Shame and HMLTD as touring partners and friends. “Yeah shout out to Shame, they’re our best mates,” Asha chuckles. “Duke from HMLTD told us off though. He told us our social media presence is terrible. They have got such a strong look and he said we don’t do enough with ours and what we do as an overall aesthetic needs to be better in my opinion.”

I try and put their mind at ease using their two recent videos as an example.

“Well, we are making our own films with the music we do. Myself, Louis and our friend Flo have made the videos to ‘Prikz’ and ‘Drag King’ and I think we are going to try and do videos to all of our songs. We were just out shooting random stuff. I like how in video a small two-second clip can be so emotional. As long as it’s emotional it doesn’t have to have a massive budget. I think that’s so important and I want to keep that with the videos to come. I don’t want a massive budget as I don’t think that makes it very relatable. Our work is kind of like collage art, a mixture of things and you can take from it what you want.” 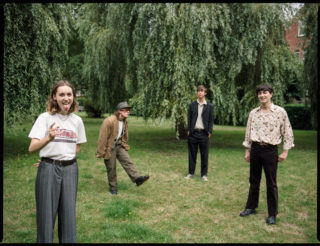 The look Sorry will continue to fine-tune, but I’m surprised that they’ve not released any physical music yet. “Well, yeah we are finally recording stuff in a studio now, although it’s very different from being at home,” says Asha as Louis joins in. “That’s why we’ve kind of put off releasing anything for ages,” he says. “I’m not sure if ‘patient’ is the right word, though. When you do loads of home recordings it’s so easy to produce exactly what you want from it – when you get into a studio it’s so different it throws you off a bit.

“I think we have some recordings we are happy with now. I think it’s important to make sure, to come across how you want to come across. It has to represent you; to make sure people know who you are. Releasing a single quite randomly is wrong if you don’t have an identity and people can’t see your background. That’s why we like throwing out demos as it gives people an idea of what we are about. If we just released a single nobody would care. They would be like, ‘oh another rock band from Camden.’ It’s an awful place but that’s us and that’s where we are from. It’s kind of become a bit ironic to us as it’s become one of the worst places in world!”

Sorry are clearly more meticulous than others in the way they work. ‘Patient’ might not be the right word for them, but perhaps it is for their new producer. “Well, we kind of do a thing in the studio where we sit around him for ages and jump and shout,” says Louis. “It must be really annoying but it seems to work for everyone.” 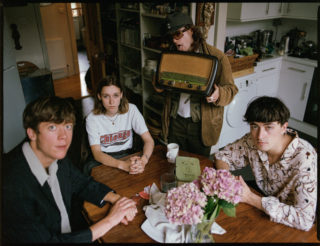 “Do it! Do it!” Asha mimics. “When we release our first single we hope to release a mixtape along with it with all the demos that we are working on, so we can keep our way of working in relation to the studio stuff – keep it mysterious and interesting, you know? You have to buy the 7” to get the mix-tape. I feel like some bands don’t keep that special relationship to their work and to their fans – having limited edition things is important. I admire how Dean Blunt or someone releases their music and you have to go out of your way to get it. When you create a world of your own with the music then that’s great. Not on Spotify, just on CDs, you know? A hard copy that people can have.”

Louis, who does most of the production work himself, with Asha on the lyrics, adds: “A lot of the stuff we record at home doesn’t sound like the band so I think it’s OK to chuck it out there. We really like Mica Levi’s work, I think her production is amazing. It’s because it’s so rough, but she also cares about what she does. She does it all herself as well. She is so sick and take Alex G, he had, like, 3 or 4 albums out on Bandcamp before anyone knew who he was. Now he has released two albums!”

And will anyone know who Sorry are, y’know after the name change? Asha seems pretty sure. “No-one is called Sorry; the only thing is that Justin Bieber song ‘Sorry’ – that might get us. Could that actually happen?” I turn to Louis but he doesn’t seem too bothered. “Fish was pretty iffy to start with, anyway, wasn’t it?” 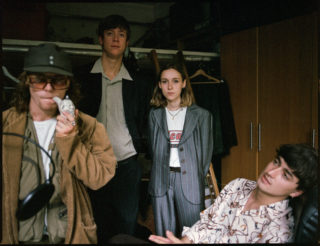