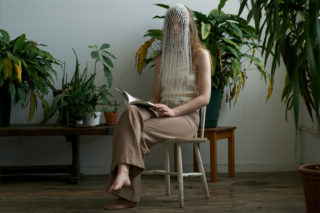 If JFDR’s slightly obscure press photo isn’t enough to entice you into listen to her latest track, then her previous credits will.

She’s prolific Icelandic multi-instrumentalist Jófríður Ákadóttir, and previous collaborator with Samaris and Gangly. Alongside artists like Serpentwithfeet and Katie Gately, Björk spoke about how JFDR is currently one of her current big influences.

JFDR’s debut solo album ‘Brazil’ will be released in the spring on her own imprint White Sun Records, and this is the second track to be taken from it.

JFDR explains of the recording: “The next day [after Greg Fox recorded] Shahzad and I pulled up the session and without speaking he started cutting up Greg’s take, copy pasting bits and pieces and turning it up so loud it was the same level as the rest of the recording, if not louder. The result is this half programmed, half live drum performance, carefully but effortlessly stitched together by Shahzad, merged with my fragile piano break up ballad.

The track was later blessed by De La Soul’s Maseo who stopped by the studio and listened. He said it was dope.”

Listen to ‘Airborne’ below.