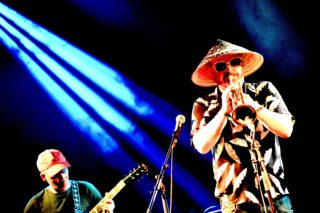 You might remember they’re the rabble who have gloriously daft names like Tingle Mackerel who plays guitar, Cloudy Truffles on bass and Fats McCourt behind the kit. They’re lead by trumpet playing vocalist Zsa Zsa Sapien.

Recently the Brixton outfit have been back in the studio recording, but they won’t be making a second album. Nope, in a bid to avoid the curse of the ‘difficult second album’ they say they’ve decided to skip straight to the release of their third one.

As of now, they do have some new music to share, though. The track is titled ‘Brother’ and comes out as a 7″ single via Moshi Moshi Singles Club on 14 July.

They’re performing some shows, this is where they’ll be: