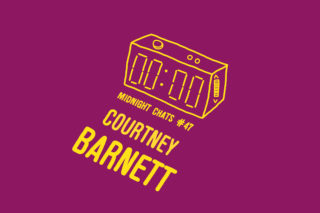 Hot topics: Bubbles the cat, the best seats in the cinema and evil cauliflowers!

Hard to measure the success of whether one of these podcast recordings has gone well but I’d probably say if you end up huddled around a computer afterwards searching things like “evil cauliflower” and “giant Yorkshire pudding” it’s probably gone alright. That’s how it ended up with Courtney Barnett – who, of course, was winning company – when she came by our office to record this podcast a while back.

It was coldest day of the British winter, so naturally we talked about things like snowball fights, her cat Bubbles, The Breeders, running Milk! Records, what the best seat to book at the cinema is and Sunday roast dinners – specifically the meals she cooks with friends that include some exotic vegetables.

The main headline from all this being that Courtney Barnett’s favourite part of a roast dinner is a WHOLE roast garlic. That’s obviously totally mad, so I moved the conversation on to explore a bit about the new album she’s made, ‘Tell Me How You Really Feel’ which is released on 18 May. So there you go.

Check out previous episodes of Midnight Chats – our guests have included alt-J, Shirley Manson, Graham Coxon and lots of other very successful people.