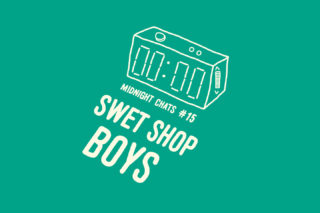 Riz Ahmed, Heems and Redinho discuss role models, the 'political' nature of their music and their debut album 'Cashmere'.

So far on Midnight Chats we’ve aimed to have one guest on each episode, sometimes two. We figure it makes for a better listen that way, a more focused conversation. For the first time we’ve made an exception by inviting all three members of Swet Shop Boys onto this new one. It paid off because, just as interesting as hearing what each of these (very) different members had to say, was to eavesdrop on the group’s dynamic. Together they’re funny, sarcastic, forthright, philosophical… well, you’ll decide for yourself.

For those not familiar, SSB is something of a multi-national, multi-cultural all-star line-up.

Riz Ahmed (also known as Riz MC) is the Wembley-born rapper and actor. He grew up battle-rapping in London, before his musical breakthrough with ‘Post 9/11 Blues’ 10 years ago. Parallel to that, he’s a successful actor, having appeared in films like Four Lions, Nightcrawler and the forthcoming standalone Star Wars movie Rogue One.

Next to him is Queens, NY rapper Heems (Himanshu Kumar Suri) formerly of US trio Das Racist, he’s a writer and rapper, and released his debut album ‘Eat Pray Thug’ in 2015.

Last but not least, London producer Redinho, according to the other two, is “the glue” that sticks SSB together.

This episode of the podcast was recorded at Loud And Quiet’s offices in east London shortly before Halloween. In it, Swet Shop Boys discuss the band’s dynamic, recording their recent debut album ‘Cashmere’ at Riz’s home, the differences between Indian and Pakistani communities in the UK compared to America, role models (or the lack of them for certain parts of society) and the ‘political’ nature of their music.

You really should subscribe to Midnight Chats on iTunes.