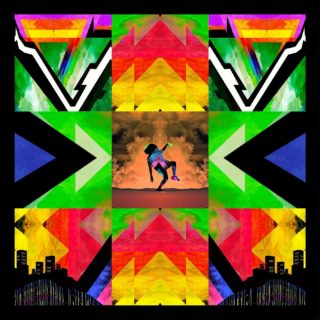 Egoli is the Xhosa name for Johannesburg, literally translated as ‘City of Gold’. The city’s song mines have remained largely unquarried by Western ears thus far, but this latest instalment in the Africa Express series of musicological excavations might just pave the way for a new frontier rush. Over a seven-week period at the start of 2018, the Damon Albarn-founded project decamped to South Africa, ushered together over a dozen artists representing multiple generations of Johannesburg musical heritage and put together an 18-track album that is bursting with fresh ideas for where to go next.

Following on from previous endeavours in Mali and Syria, the album opens with the finger-plucked maskandi guitar of Phuzekhemisi, a South African musical institution for fifty years. The track is ‘Welcome’, a nod to the past before we embark on this journey into the Afrofuture. For this is an album that faces in many directions, but nearly all of them forwards; take, for example, ‘Africa to the World’, a showcase for Infamous Boiz and Dominowe, masters of the raw, kwaito/hip-hop hybrid known as Gqom, a hypnotic, nodding track that opens up over time, completed by the desert guitar licks of Yeah Yeah Yeahs’ Nick Zinner. Or indeed ‘City in Lights’, a pristine example of acholitronix, the ’80s house-inspired wedding dance music here performed by Otim Alpha, with vocals from Mahotella Queens and London’s Georgia.

So many of the artists enlisted on Egoli will be discoveries, each one bringing their own histories and traditions, their own visions of the endless possibilities that their new flavours can add to the global mix. As the Shangaan Electro boom proved earlier this decade, the untapped talent is just in need of a breakthrough; one surge and the levees will break. This album is teeming with potential surges.

One breakout star could be Moonchild Sanelly, South Africa’s ghetto-funk answer to Lizzo. Her bars on the stoner jam ‘Where Will This Lead Us To?’ are characteristically forthright, and even more so on ‘Morals’, featuring boom bap drums which pound a hazy rap track through the smoke. Producer Sibot catches the ear on more than one occasion too: the electro-jazz vibes of ‘Johannesburg’ compliment the unmistakably louche vocals of Gruff Rhys in a loving paean to the sprawling city that bears its name, but one track later Sibot is cutting an altogether different outline, the sort of nu-disco that you might associate with Todd Terje, skilfully manipulating an Albarn vocal sample to build momentum.

Grime superstar Ghetts lends his vocals to ‘No Games’, trading bars with Sho Madjozi as well as Sanelly, over a track that takes a UK Afrobeat production back to its source heritage. Soweto band BCUC contribute their ritual chants to ‘Bittersweet Escape’, a pulsing, creeping number that seeps surreptitiously underneath the membrane of your consciousness thanks to the sultry vocals of Nonki Phiri. ‘Absolutely Everything is Pointing Towards the Light’ is a duet between Rhys and Zolani Mahola, a beautiful study in melancholy with a lead melody that could come from any century and would survive many yet to come, given the chance.

Most poignant of all is the contribution of DJ Spoko, who passed away a few months after recording his track. Spoko had been the pioneer of what became known as Bacardi house, so how appropriate that ‘The Return of Bacardi’ is one of the album’s highlights; a jumping, minimalist Shangaan dance track that shuffles and circles back on itself, a micro-melodic house tune that should ensure the continuation of Spoko’s legacy beyond his lifespan.

The Albarn melodic signature that is so familiar is withheld until the closing two tracks, the latter, ‘See the World’, evoking a communal sunrise experience. Along with ‘Welcome’, it bookends the record beautifully, but it is what lies between the two that is the album’s raison d’être. The myriad strains of South African electro and acoustic music that are touched upon are too many to mention, and in many cases individual artists demonstrate their ability with multiple styles. The sense of diverse possibility is what endures most of all throughout Egoli, and indeed everything that Africa Express touches. In an over-saturated world, genuine enthusiasm for something fresh is hard to come by. Egoli has it to spare.