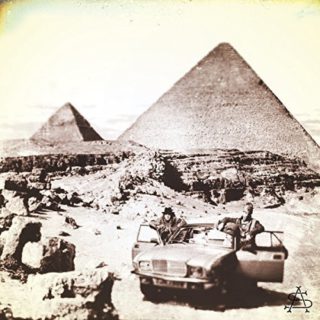 Despite comprising four tracks, ‘Livin’ In Elizabethan Times’ – a quintessential “shit, yeah, that actually makes sense” collaboration between The Beta Band’s Steve Mason and Primal Scream’s Martin Duffy – is offered up as a mini-album.

Gutsy? Perhaps, but in traversing tangential orchestral-pop and celestially-minded experimentation over 28 minutes, calling it an EP would be doing it a disfavour. While, as a self-proclaimed concept mini-album, it suffers from an identity crisis (the lyrics conjure the outer reaches of known space, the artwork depicts Mason and Duffy in ancient Egypt via Hollywood, and the title directly references the 16th century) this is a release that not only rewards but demands a repeated listen.

Only then does its glints of inspiration – from the free-jazz freak-out at the tail-end of ‘The Visitations’ to the simmering Kosmiche noodling on ‘The Moon Is Not Your Friend’ – shine through. All things considered, a curious, at times deftly earworming debut that sets up its hopefully more single-minded follow-up nicely.