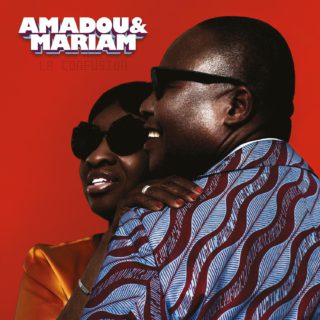 It’s difficult to think of a couple who’ve been making music together for the best part of four decades, and even harder to think of any who, on their ninth studio album, are still attracting as much attention as Amadou and Mariam. The Malian duo have, over the years, been embraced by the likes of Damon Albarn (perhaps inevitably), but also a greater audience in the West as their huge profile has transcended their genre and geographical origins.

‘La Confusion’ serves as a document to their exuberant, uncomplicated appeal. Songs like ‘Bofou Safou’ are joyously infectious – bright, rhythmic and colourful, with zero musical baggage. It’s funk of the most poppy, enjoyable and accessible variety, and there’s a genuinely unfettered happiness to be found in the ringing vocals, too.

At times the record feels like the soundtrack to Beverley Hills Cop after a long, life-changing stay on the African continent, while the title track is something like ‘Echo Beach’ washed in an azure ocean. There are some more reflective, considered moments, too, like ‘Mokou Mokou’, which amounts to a ballad. Brushed with an intangible sadness, its vocal inflections are lent weight by an unknown (to most listeners, at least) tongue.

Mostly though, ‘La Confusion’ is a blast of musical fresh air, accomplished with joy, exuberance and pure talent. Of course, you could also describe this as just another Amadou and Mariam record.