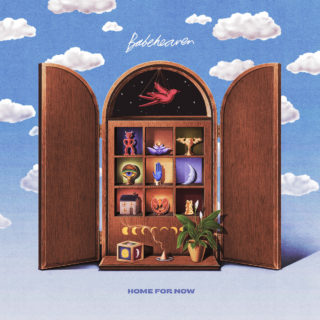 Babeheaven should be touring America right now. Because of some pandemic or something they’ve been forced to stay put, working on their first record (aptly titled Home For Now). Some debut albums seek to take the listener on a journey; others establish a vibe and riff on it, and this is definitely the latter. It’s a smoothly-grooving R&B record that inhabits an expansive soundscape, and gets as comfortable in it as you are in those trackie bottoms.

Babeheaven are a pair of old friends, Nancy Andersen providing the steady vocals that melt into Jamie Travis’ production. They’ve opened for Cigarettes After Sex and there’s a straight line – a little obscured by reverb – you can draw between the two. Andersen’s vocals have this calm that grounds the production; it allows Travis to experiment with everything from Portishead-style behind-the-wheel-on-a-long-drive-synths to natural field recordings . It all adds up to a record that’s all mood and reflection – with a certain positivity throughout. There’s no guilt-tripping or scores being settled; it’s a serene acceptance of that which we cannot change, with single ‘Friday Sky’ the best example of this.

One could criticise this comfort – it is quite safe. The pair make a nice little bed and rarely leave it, which is a shame, as the more explorative points are often the strongest: ‘In My Arms’ has a crescendo that expands further and further and ‘Until The End’ is a dance number replete with ripcord claps and barking hi-hats. But Babeheaven know what works for them – and what works for them is pretty, peaceful and pleasant. Is that not enough?