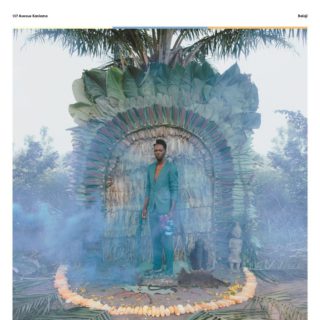 Baloji isn’t one to limit himself. His new record is a sprawling tableau that blends funk, soul and hip-hop with traditional African rhythms in a mass of multicultural influences. He has lifted musical styles from his native Democratic Republic of the Congo and filtered them through the lens of his Belgian upbringing, feeding in elements cherry picked from Zimbabwean, Nigerian, and Ghanaian music. This could easily become a crowded place but Baloji manages to navigate the chaos even as the record flits not only between genre but between language, as on the French-English hybrid ‘Spotlight’, a buzzing exploration of our obsession with technology and the masses of time we spend staring into screens.

Lead single ‘Soleil de Volt’, with its strutting guitar, is equally electrifying – Baloji’s tribute to the enterprising attitude citizens of his childhood home Lubumbashi take on when services have been cut. It sparkles with uplifting backing vocals and shining instrumentals. ‘Soleil de Volt’ shows Baloji’s genre-splicing at its best, the psychedelic electric guitar cutting through a funk beat and rapid rap vocal. It helps ‘137 Avenue Kamiana’ feel like a breath of fresh air from start to finish, with ‘Passat & Bovary’’s vocal harmonies and drum beats forming a particularly joyful point.

In places, things do get introspective, like the spoken word track ‘La Derriere Pluie/ Inconnue a Cette Adresse’ in which Baloji touches on the pain of being separated from family, but it is done with such a gentle hand that the piece avoids drifting into bleakness. Primarily, ‘137 Avenue Kamiana’ is an album to move to, and a celebration of colliding musical cultures.