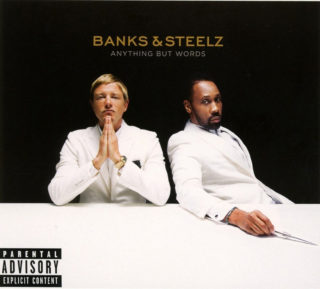 Well, this is bad. Having decided back in 2011 to pool their resources in what they’ve described themselves as a “very peculiar” alliance, Interpol frontman Paul Banks and longtime Wu-Tang Clansman RZA have put together a full album of the stuff. On paper, its bizarre incongruence is enough to whet even the most sneering of music critics’ appetites. That is until you remember that Wu-Tang’s last decent LP, ‘8 Diagrams’, came out almost a decade ago. And that Interpol haven’t made an album of any sort of relevance in 12 years.

Back then things were simpler. You needed a Harvard email address to sign up for Facebook, and you could still smoke your brains out in the pub. And, indeed, speaking of stale aftertastes, it was also the era of rap rock, a genre that precisely no one hankered after until Paul Banks and Robert Fitzgerald Diggs sat down to plot ‘Anything But Words’.

Exhuming the corpses of Evanescence and evoking the spectre of that Linkin Park and Jay-Z collaboration, Banks and RZA have created an album bereft of taste, hooks or poetry. By the time the latter’s Wu-Tang pals Method Man and Masta Killa are roped into proceedings for tuneless, aimless closer ‘Point Of View’, the shark, you feel, has been well and truly jumped. A vanity project 5 years in the making, I urge you to listen to anything but this.