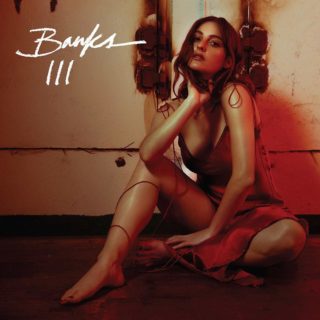 As BANKS, California native Jillian Banks released a series of slow-burn alt pop hits like ‘Beggin’ For Thread’ and ‘Gemini Feed’ from 2013 to 2017. Then, abruptly, the music stopped. Now, after two years of soul-searching, the singer-songwriter is back with her aptly titled third album, III.

So, how has BANKS updated her sound for 2019? Most noticeably, the sparse, mid-tempo tracks of albums Goddess and The Altar have been abandoned in favour of danceable, layered production. With the help of producers like BJ Burton (Lizzo, Bon Iver) and Hudson Mohawke (Kanye West) she’s been able to breathe some life into the moody RnB that sometimes bordered on the morose.

Lead track ‘Gimme’ is a clear stand-out. As the plaintive chorus calls to “gimme, gimme what I want” BANKS demonstrates the devil-may-care attitude of a woman who knows her own mind. Clearly, it’s intended as some kind of mission statement for the next chapter of her career, but is the rest of III as well developed? Maybe not. In what feels like a pointed response to detractors who described BANKS’s earlier work as lifeless and bland, III is stuffed to the hilt with distortion, throbbing beats and unexpected details, and sometimes it makes for tough listening.

Yet she consolidates her reputation as a vocal tone master, flitting between wistfully soft one minute to iron-clad and resolute the next. It’s great to hear her voice given room to breathe on ‘Sawzall’, a pared-back track about heartbreak, whilst songs like ‘Stroke’ – where her voice gets lost amongst a sea of crackling, manipulated sounds – feel like missed opportunities. Similarly, the chorus on ‘Look What You’re Doing To Me’ is a bit overblown, forcing BANKS’s voice to stretch itself to be heard over the crescendo of competing sounds.

Album-closer ‘What About Love’ delivers a much-needed dose of introspection as the singer ruminates over a lost relationship and self-growth. However, the use of sickly sweet samples of a child’s voice (reputedly BANKS’s 4-year-old niece) saying “I love you” reduces the song’s emotional tenor to trite simplicity.

Whilst there are golden moments like the touching ‘Made of Water’ or the catchy ‘Alaska’, III underperforms overall. Managing to be both half-baked and overdone, it’s an album that tries to do too much only to fail to deliver on its potential.