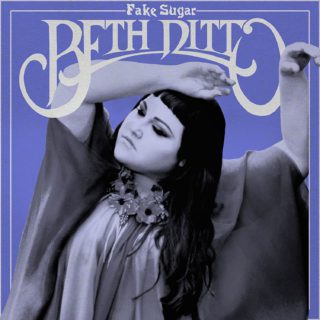 Yet for an artist who describes herself as a “fat, feminist lesbian from Arkansas”, and who’s biggest hit to date is the gay rights anthem ‘Standing In The Way Of Control’, one of the first things that strikes the listener about her debut solo album ‘Fake Sugar’ is its lack of political edge.

Written before Donald Trump’s election victory, it’s instead a shamelessly bold and breezy pop record that’s full of romantic hopes. Ditto has called it her “southern record” but, while the country-blues closer ‘Clouds’ fits this description, it could more accurately be labeled her ’80s one.

These tracks are irresistible all-out chart grabs but it’s when she diverts her powerhouse lungs to more soulful, dance floor numbers that she really holds her own. The retro blues-rock of lead single ‘Fire’ is a case in point, its commercial potential proven by the fact it premiered on BBC Radio 1, but ‘Oo La La’ and ‘Do You Want Me To’ are also destined to become indie disco favourites.

The real gems in the collection, however, are the slow burners, where she gives a more restrained delivery. ‘In And Out’ introduces a sweeping romanticism that updates girl group pop, while the sultry title track is all shuffling funk. These give the album a jukebox vibe that’s sweetened by the material’s positivism and bright colours.