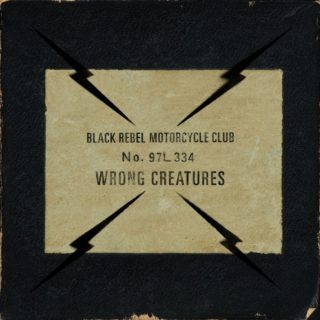 Black Rebel Motorcycle Club, at the time of their emergence in 2001, were a cool band – a black-clad outlaw gang snarling in a sea of dry ice. Not many of their contemporaries from the era have made it this far, and that the trio can still sell out venues the size of Brixton Academy is supporting evidence for the ‘rock ‘n’ roll survivors’ tag they’ve inevitably picked up at this stage in their career.

But of course the march of time, with very few exceptions, weathers the edges and diminishes the fire in every band who get as far as Black Rebel. In an eight album career there are always going to be a sticky patches, musically speaking, and the San Francisco group have had their fair share of those.

So it’s with a mixture of trepidation and anticipation that many among their (still considerable) fan base will be approaching ‘Wrong Creatures’. Opener ‘DFF’, though, settles those nerves; it’s wordless, menacing and edgy. Underpinned by a brutal bass riff and muffled tribal drums it feels vicious, like a toothy dog tethered to a picket fence. Then there’s ‘Haunt’, the closest the band will ever get to a ballad – meandering, dark and woozy, like The Bad Seeds on tranquillisers.

There’s a respectable portion of this record that’s genuinely thrilling, but in places the cracks start to show. Chief amongst Black Rebel‘s flaws has always been a tendency for self-indulgence, and at almost an hour in length ‘Wrong Creatures’ could have done with someone prepared to wield the knife – songs like the irritating, organ-driven ‘Circus Bazooko’ should never have been allowed to leave the studio.

‘Wrong Creatures’ is, in effect, a distillation of Black Rebel’s fundamental qualities and flaws. It’s deep in their bones – the brutally good and the terminally bad. It’s a battle that continues as they edge into their third decade together.