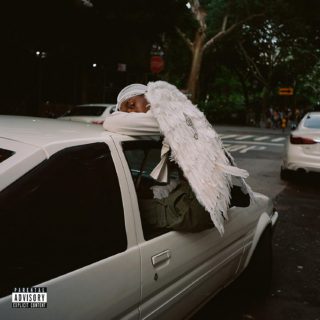 Dev Hynes released his last Blood Orange album, ‘Freetown Sound’, just weeks after a mass shooting at a gay nightclub in Orlando. Freetown was his father’s birthplace in Sierra Leone; as a collection it disentangled the rhizomes of black culture in a world more attuned with white soul-bearing. Cameos from queer icons were dealt an even more somber context – a ubiquitous melancholy was tinged with a brand-new powerlessness.

‘Negro Swan’ talks the same talk, overlapping introspection with a greater narrative of black existence and black depression. ‘Orlando’ opens the record with a funk-infused bassline you don’t know whether to dance or cry to, as it vocally appears to second-guess 2016’s nightclub shooters: “First kiss was the floor, but God it won’t make a difference if you don’t get up.” You hear another voice later shouting, “Shoot baby, shoot!” We don’t have another direct reference again.

Lead single ‘Charcoal Baby’ is a standout, calling for self-examination above a lavish groove and delicate sax line akin to 5 Spot-era Eric Dolphy and Mal Waldron. ‘Saint’ and ‘Take Your Time’ are beautifully melodic RnB pieces – lush female vocals intersperse with chattering and alt-jazz chops of the New York passers-by. In ‘Jewelry’, Janet Mock makes an appearance as narrator with an abrupt tale of social intrusion and the psychological impact of de-colonizing white spaces. In ‘Dagenham Dream’ she later explains that “part of survival is being able to just fit in.”

Musically ‘Negro Swan’ is both Hynes’s most energetic and most subdued work, playing like a carousel lampshade illuminating and warping the brief patterns of melodic soul, jazz, hip-hop and RnB. Every conversation is personal but feels applicable to a greater black narrative. At its most rich vocal moments it recalls Moses Sumney’s ‘Aromanticism’ and Frank Ocean’s ‘Channel Orange’; at its most curious it hits with the sampling playfulness of J Dilla. In normal protest, you’re allowed a core belief but not the ability to expand upon it. But ‘Negro Swan’ takes a look at “Black Lives Matter” and carefully starts to add the “because.”