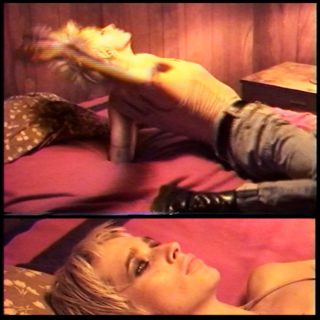 Reading the introducing statement to Boy Harsher’s new work is a misleading experience. Described as “an album of hypnotic and intense dance-floor ready meditations on attachment and love” one would expect ‘Careful’, the band’s second album, to be a collection of electro-pop tunes crafted to heat up the dancing crowds in a club. Well, that depiction isn’t particularly accurate.

The inherent darkness typical of Jae Matthews’ and Augustus Muller’s songwriting is even more present here than in their previous material. The American duo has been through an emotionally hard time since their last record, and these gloomy events permeated their sound in a compelling way. ‘Careful’ is the word that Matthews had tattooed live on her back during a performance when her relationship with Muller broke down; a term which gained a whole new meaning when the singer’s mother was diagnosed with dementia, forcing her to deal with themes like family ties, memories going astray and love to lose and find.

Very much indebted with British synth-pop and dark wave ­– it’s quite easy to spot a few references to Depeche Mode and Tears for Fears within the ten tracks – Boy Harsher’s tunes are a deep dive in the early ’80s, with their piercing synths and clean drum machine. Perfectly produced with Muller’s minimal equipment, the sound is crisp and clear, without the chichi glaze of a phoney vintage rumple – a sharpness that adds a further charming nuance to an album as enthralling to turn into a cult classic.