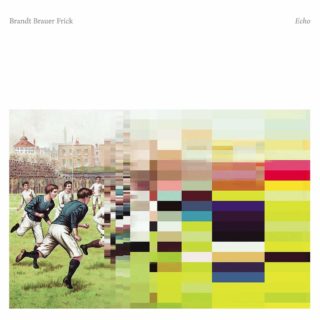 Brandt Brauer Frick’s universe is one imagined through flesh and through machine. A full decade on from their debut, the Berlin trio have yet again gone about deconstructing club music, stitching together drum machines and synthesisers with strings, piano and brass for their latest album, Echo.

The arrangements here are, uniformly, fine. At times, the intricately edited beats stutter in sonic ambiguity: too lacking in serrated knife-edges to entrance club music aficionados, too devoid of washing textures to enrapture even the most liberal of neoclassical heads. Ultimately, the songs struggle to give the impression that they are anything but stargazing remixes of existing club tracks. Rather clumsily, ‘Fuel’ aims for cacophony, but instead unravels with overcompensating acoustic touches, like an acoustic iteration of an average-to-decent Bicep dancefloor hit.

But Brandt Brauer Frick are nothing if not chimeric, moving nimbly between nourishing orchestral passages and the synthetic, synapse-flickering heft of great club music. Album opener ‘Rest’, an apt sign of some of the richness contained within, is rigged with delirious, stalking rhythms and billowing strings. ‘Chamber II’, meanwhile, sounds as though super intelligent AI has perfected live instrumentation, implied by the way the featherweight piano shimmers so ominously and so ponderously, a creator confused by their own creation. When such florid piano playing has dominion over all other sounds on the album (‘Mont Blanc’) everything seems to make sense.

All in all, Echo casts Brandt Brauer Frick as durable stylists. In a way, the trio’s dedication to restless, passionate production becomes diluted because of their reluctance to venture away from – or beyond – the collision of two materially divergent worlds. Triumphant instrumentation rarely rings so hollow.