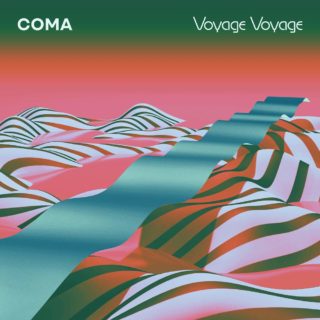 Chirruping synths and melancholic electronica has always had a corner of the German underground roped off, where the rest of the world sometimes goes to visit to have a little – but always very cool – cry. The pleasant and understanding bouncer that invariably lifts that rope up for you has been City Slang. At the turn of the new Millennium, indietronica was dictated on the terms of The Notwist’s Neon Golden; a decade later, on Caribou’s Swim.

New City Slang signing COMA, comprising German duo Georg Conrad and Marius Bubat, buy into a rich history with Voyage Voyage, and it sometimes works. The propulsive FM funk of opener ‘Snurrebassen’ is everything authentic that Jungle have ever set out to achieve, compacted into six minutes of synth arpeggios and digital vocal modulations. The downtempo melancholy of ‘Minor Matters’ seems to have clawed its way through the blinds of Low’s Double Negative, with occasional flickers of Alan Sparhawk’s rawest and most incantatory vocals. ‘Myopic’ is a rich highlight of digital and analog disparity, toying with a literally short-sighted refrain (“Don’t get closer/ you won’t see it”), but even that gets melodically wound up as you want it most to unspool.

It can get a little annoying elsewhere. The layers of tacky beats on ‘Inside Out’ do little to soften the blow of the slightly-too-whiny vocal effects. The insistent whimsical bounce of ‘A-Train’ doesn’t cover up its kitsch-romanticism. ‘Sparkle’ always sounds like it’s about to break into a chorus of The Temper Trap’s ‘Sweet Disposition’. There’s very little that makes Voyage Voyage more than a couple of really good songs; it’s always almost quite interesting, but its escapism is one dimensional enough that you’ll soon want to come back.