Deerhoof have always seemed a little like Chess Grandmasters, able to be three moves ahead of everyone else. Most bands go a bit stale after 25-ish years, but the San Franciscan quartet just get sharper and sharper, honing their innate unpredictability into an art form.

Future Teenage Cave Artists is the kind of album that only a band like this can pull off. Managing to be both a continuation of and a departure from the lo-fi trajectory of Mountain Moves and The Magic, the sounds here are more polished and refined. Some things don’t change though, and true to Deerhoof’s improvisational nature, the band romp through fractured R’n’B, pop, noise rock and classical influences like someone searching for a station on a car stereo.

Conceptually, this is also an album to rivals conceptual ambition of its predecessors. This time band are attempting to lasso two different, yet interrelated themes: revolution and uncertainty, coming at it the perspective of a group of youths determined to live outside the system and take it down through their own DIY networks. As a result, some of Future Teenage Cave Artists sort of seems like Deerhoof’s Kick Out The Jams moment. Tracks like ‘Sympathy for Baby Boo’ and ‘New Orphan Asylum for Spirited Deer Children’ are built on guitar lines that slap into you like a shoulder barge, and syncopated drum patterns recall the stern, no-nonsense funk of Edwin Starr and James Brown.

But, as the past few years has taught us repeatedly, revolutions often don’t end in utopias. Deerhoof are smart enough to bake this concept right into the moments of revolutionary clarity. Whenever Cave Artists feels like it’s slipping too far into childlike ideology or hard-edged fury, songs suddenly careen off into paranoid synth stabs or anguished, squalling noise.

The two tracks that close the album capture this dichotomy perfectly; the bright-eyed, hopeful indie rock of ‘Damaged Eyes Squinting into the Beautiful Overhot Sun’ slipping into ‘Call On Thee’ a three-minute, piano-only lament. In a way it feels like the aftermath after the storm, leaving our heroes, like us, having to face a new world, where everything familiar is gone, the ground has shifted, and there is no way back. 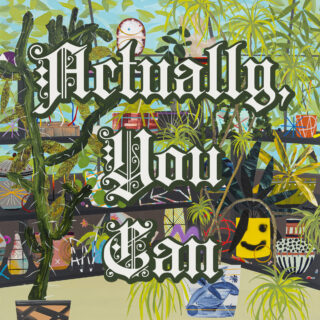 Actually, this is a very good 'Rococo Garage' album from Deerhoof