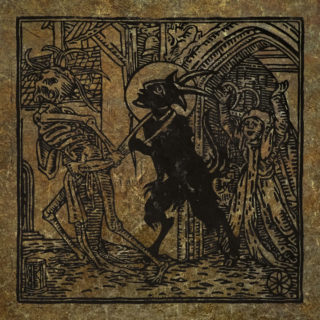 This is probably the album I’ve been most excited to write about in 2020. I rarely return to records I’ve covered for L&Q, but since my interview with Delmer Darion earlier in the year I’ve found myself repeatedly returning to the early mix they sent me. This isn’t the duo’s first project – they have been floating around between Exeter and Bath for a couple of years and have circulated material in that time – but it’s still remarkable how fully formed their debut LP Morning Pageants is.

The album uses IDM as a medium to retell the story of Satan as a cultural figure, from early modern terror through to the prosaic-by-comparison suburban paranoia of the 1980s American Midwest. Both ends of the record work well, but it’s in the first half where the duo really push into the most odd, exciting parts of their sound. ‘Darkening’, for example, feels like a straightforward homage to the small coterie of ’90s bands that fused shoegaze and IDM – think Seefeel, Boards of Canada, Flying Saucer Attack. Its synth intro haunts as much as anything on Geogaddi, and when the track freaks out into full shoegaze it’s as satisfying as anything I’ve heard this year.

‘Lacuna’, meanwhile, finds the band exploring ambient. Biosphere is a clear influence – the watery field recordings lurking in the background could have come straight off last year’s The Senja Recordings – but the band never settles into a full drone section. The duo is frequently this restless throughout Morning Pageants, and occasionally it’s to the album’s detriment. For example, the noise interjections on the second half of ‘St Louis’ trouble the song so effectively I found myself wishing the idea was more fully explored. But then, it hardly feels fair to criticise the band for throwing away ideas that lesser acts would milk dry. I am extremely excited to see where Delmer Darion go from here.