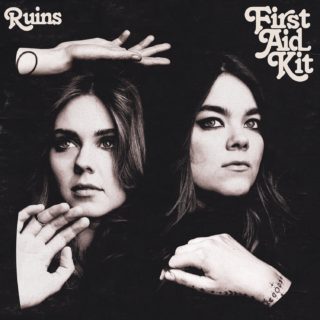 Since 2014’s ‘Stay Gold’, First Aid Kit’s third album, Swedish sisters Klara and Johanna Söderberg took some time to live separate lives. Most notably Klara moved to Manchester with her fiancé. After that relationship ended, this collection represents something of a post-mortem – an LP of break-up songs.

As is often the case with such a well-worn trope, the results are hit and miss. ‘Distant Star,’ for instance, is one of the more poetic songs the Söderberg’s have written to date, built on top of a curious interpretation of traditional country. On the flipside, recent single ‘Fireworks’ is a conventional, plodding ballad that lacks momentum. Album opener ‘Rebel Heart’ simply smacks of cliché.

Longtime fans will find the sound they’ve known and loved since First Aid Kit infamously covered ‘Tiger Mountain Peasant Song’ in 2008. While the band seems to want to move beyond that phase of their career for good, it’ll continue to haunt them so long as they write songs like the lovely title track, which evokes Fleet Foxes in sound and style.

Things only really become interesting on ‘Ruins’ when they wander outside their comfort zone. ‘Distant Star’ is a fine example this, as is ‘Postcard,’ the most brazenly country song the pair have recorded to date. The album’s highlight though is final track ‘Nothing Has to Be True.’ It starts like a gentle and reflective piano ballad but grows to a raucous genre-agnostic anthem that fades out in a mist of static feedback. It’s an ambitious piece of work that will likely close out First Aid Kit’s live set for years to come.

Saying that, and despite the odd highlight, for better or worse ‘Ruins’ mostly stays well within the First Aid Kit wheelhouse. ‘Ruins’ is on brand – there’s the odd moment of adventure, but for anything beyond that it’ll have to be the Söderberg’s next record.