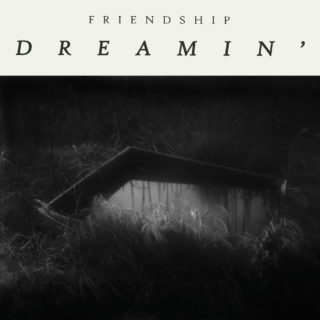 The story goes that Dreamin’ is the product of a period during which Friendship singer Dan Wriggins, and drummer Mike Cormier, worked as live-in groundskeepers at an estate in rural Pennsylvania. The sound of passing headlights in the small hours, this record feels like the result of the kind of reflection and perspective that can only be truly afforded by physical distance.

In creating the follow-up to 2017’s ‘Shock out of Season’, Friendship have dispensed with the programmed percussion that made its predecessor sound, at times, like a demo version of what was to come, and Dreamin’ feels infinitely more complete as a consequence. Recorded directly on to tape, it is imbued with a warmth and compassion that lifts these songs far above anything the group have done before, striding into the alt country territory occupied by the likes of Will Oldham and Bill Callahan for so long.

And there’s poetry. From opener ‘I Don’t Have To Imagine Your Love’, Wriggins places himself as the omniscient narrator of a series of discoloured snapshots, capturing the fleeting interactions of his characters in scenes which are, on the surface, unremarkable and yet which become all the more poignant for it. His talent to focus on imagistic detail, free of unnecessary ornamentation but full of colour, means that a passing conversation between acquaintances or the sight of a bird making its nest in a suburban tree become transfigured and significant.

“Blessed is the front porch,” Wriggins sings on ‘Dusky’, a love letter to his vantage point as he surveys the comings and goings of daily life. Blessed indeed.