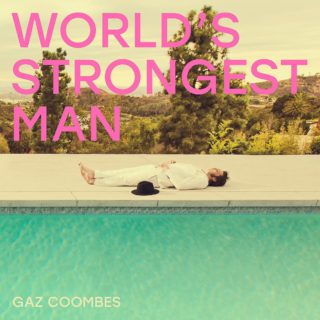 Once upon a time, Gaz Coombes was the frontman of Britpop’s most wacky and zany band, Supergrass, who were never short of a goofy grin, a puppet prancing in their videos, and songs about being young, free, clean of teeth and banged up by the rozzers. But not anymore.

His third solo album, this is a Channel 4 drama of a record, in a dystopian post-apocalyptic world that may not be that far away. The absurdity of our pre-Brexit/present Trump/Russian-spies-in-Zizzi world is affecting everyone and music, too. And described as being inspired by – amongst other things – Grayson Perry’s The Descent of Man, Frank Ocean’s ‘Blonde’, Californian weed, British woodlands, unchecked toxic masculinity and hip-hop, ‘World’s Strongest Man’ is a veritable melting pot of genre-bending songs.

‘Walk the Walk’ has Coombes channelling his inner Thom Yorke, with a debt to everything Radiohead have done since ‘OK Computer’, while ‘Vanishing Act’ brings things up to date by aping MJ from Hookworms’ vocal gymnastics and visceral, guttural screams – “I’ve gotta get my fucking head straight!”. Lead single ‘Deep Pockets’ then propels forward with a motorik beat, a Krautrock drive and falsetto harmonies. It’s a track that’s indicative of this adventurous and exciting record, which is another step forward from Coombes’ ‘Matador’ LP of 2015, helping him to avoid being pigeonholed like his former band unfairly were.