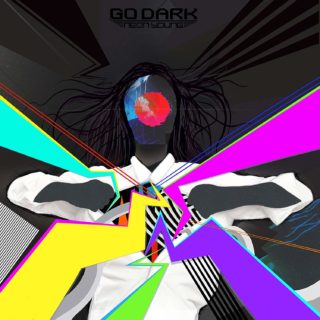 Ashley ‘Crash’ Gallegos met Adam ‘Doseone’ Drucker on the streets of Oakland, a town in which the latter is a long-established independent hero. As a founder of the influential Anticon label and collective and a member of alternative hip-hop groups cLOUDDEAD and Subtle, Dose is a lifelong experimentalist, so any new project deserves attention, not least when it comes with the seemingly incongruous Bella Union stamp of approval.

Little about Go Dark is predictable, save for its sense of primal, furious urgency. Dose has spoken of his compulsion to score Crash’s vocals with the nastiest beats and he bends sound and space to make it happen here. Percussive slaps and jittering modulars saturate most of the palette of ‘Neon Young’ for a claustrophobic, erratic and hyperactive listening experience.

8-bit, noir-soul and glitch-punk are compressed into one evil hybrid on tracks like ‘Day Moon’ and ‘The Blade’, a splurge of DIY vitriol that seems to capture the spirit of the age more essentially than a classic protest song ever could. Any specific anger is too deeply shrouded in confusion and personal anxiety to allow one clear message to rise out of the mess. It is an alienating listen and it should be. Isn’t that how you feel most of the time these days too?

There are tunes hiding in here, notably ‘Beautiful Bitch’, in which Crash is able to suspend her internal squabble with herself for long enough to allow a discernible chorus to emerge, but it almost feels like a betrayal. If the lot of the artist is to reflect our society back at us, then Go Dark could have an essential role to play in 2019.