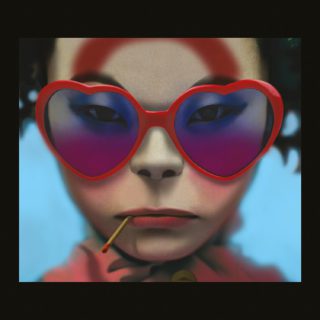 Whatever you think of Damon Albarn, he clearly isn’t a subscriber to the old idea that too many cooks spoil the broth. His appetite for joint creative endeavours has never been clearer than in his output with Gorillaz and when the deeply impressive list of collaborators for their fifth album leaked a few days before it had even been confirmed that the record existed, nobody really questioned the validity of it.

From Del Tha Funkee Homosapien on their 2001 self-titled debut to the late, great Bobby Womack’s turn on their last LP, ‘Plastic Beach’, the defining characteristic of Gorillaz has never been Albarn’s writing or even Jamie Hewlett’s cartoon band, for that matter – it’s that the name really acts more as an umbrella term for whichever colourful cast of acclaimed artists have been assembled that time around.

Albarn measures out Gorillaz less in terms of records and more with regards to “phases”, and ‘Humanz’ bodes well for Phase Four. As usual, it’s thrillingly ambitious and tremendously kaleidoscopic in terms of its vision. What sets it apart, though, is a palpable sense that Albarn is facing firmly forwards. This is a record that not just reflects the temperature both of the musical and political climates, but – at its best – sounds positively futuristic.

The first track proper, ‘Ascension’, packs in an energetic Vince Staples turn alongside a gospel choir. ‘Momentz’ brings back the recently resurgent De La Soul and pairs them with double-dutch chants over a thumping beat and sprinkles of glitchy electronica. The only thing not utterly chaotic about ‘Charger’ is the perennially unflustered Grace Jones, icy as ever. More so than any previous Gorillaz album, ‘Humanz’ feels so rammed with different ideas at every turn that it’s hard to escape the feeling that the wheels might come off at any given moment. The difference is that this time, you suspect Albarn meant it that way. Hectic music for hectic times.

A positive to that is that the slower moments, when they do arrive, are all the prettier; the achingly lovely ‘Busted and Blue’ is mostly just Albarn with synths that sound like the Blade Runner score on downers. The drawback, though, is that occasionally there’s experiments that don’t come off – the off-kilter dynamic of ‘Let Me Out’ just makes it sound like it’s been pieced together, and ‘Sex Murder Party’ never quite seems to take off like it threatens to throughout. Closer ‘We Got the Power’ could really, really have done without Jehnny Beth from Savages, too, who sounds almost comically out of place.

Still, ‘Humanz’ is largely an impressive showcase of how Albarn’s eclectic tastes are something he’s more than capable of harnessing and tying together with intelligence and nuance. On ‘Plastic Beach’, he weaved a convoluted and jarring throughline and you wonder whether that’s because he was trying to compensate for the lack of purpose in the music. This time, there’s a consistently industrial flavour to the sound of the record and an unremitting sense of disarray that suggests Albarn is subtly holding up a mirror to the world around him. What he saw reflected back was ripe for a project as deliberately disparate and all-encompassing as Gorillaz.