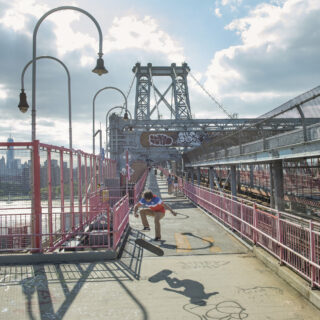 The story of Hagop Tchaparian reads like a reanimation of Almost Famous. As a teen, and guitar player in ’90s post-grungers Symposium, he hit the Warped tour and played the main stage at Reading Festival, but also ended up in a debt-ridden split that pushed him away from guitar music and into a growing love of dance. After loitering and flyering outside the clubs of east London like an electro William Miller, Hagop found himself helping out Hot Chip and Four Tet on tour, observing their work and gradually developing a collection of his own sounds encouraged, and eventually co-signed, by Kieren Hebden for release on his own Text Records label.

According to Hagop, the sounds and vignettes that make up this debut album have been accumulating on a smartphone in his pocket for almost 15 years – from isolated snippets of videos sent by friends to recordings of street musicians – it all comes together on Bolts in a vibrant mix of lo-fi techno and manipulated folk instruments that vividly speak to his Armenian heritage.

Opener ‘Timelapse’ is sparse and hypnotic whereas the wailing ‘GL’ drops you onto the border of Europe and the Middle East before battering into a satisfying techno punch. ‘Raining’ swoons and groans with deep, dubby patience while the excellent ‘Round’ sounds deliciously like Embers-era Throwing Snow with its rich, woozy electronica and driving beat. But it’s ‘Right to Riot’ that stands as the album highlight, bringing together old and new in a rising, bona fide rattler of a track. There’s a momentum that’s only ever heading one way as hand drums, pulsing electro and a cavalcade of buzzing zurna layer on like a game of Buckaroo, and then bosh! – the bass hits and you’re on a rooftop in Yerevan, staring at the mountains, techno fisting into the night sky.