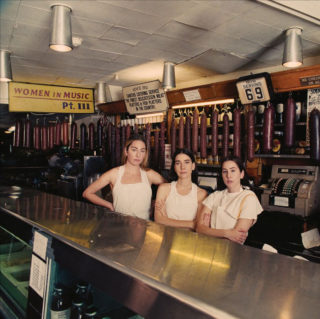 Haim’s last album never quite replicated the carefree, giddy seduction of their debut, but in comparison to their new one, it now sounds like a breeze: on album three, there’s Los Angeles paranoia, abandonment, and relationship miscommunication — and that’s just the first three tracks.

Add to that cocktail the cancer diagnosis of Ariel Rechtshaid, the band’s long-term producer and partner of Danielle Haim, and from one angle Women In Music Pt. III starts to feel relentlessly heavy. From another, though, there’s a sense of a band attempting to deal with evident growing pains in a productively experimental way: the electronic production tricks on ‘I Know Alone’, ‘3AM’ and ‘FUBT’ attempt new presentations of a band previously at risk of falling into self-parody, and the stripped-back stylings of ‘Leaning On You’ and ‘Man from the Magazine’ offer a hitherto unexplored intimacy.

Elsewhere, however, lie missteps, most egregiously on the cod-reggae of ‘Another Try’ — the sort of thing Vampire Weekend would pull off with a tongue in cheek, but which Haim are too earnest to deliver — and the presence of these alongside far too much filler (at least 4 of the 16 tracks here could vanish without anyone protesting) makes for an album that’s tough to fall for in the same way as their brilliant first. The final trio of ‘Now I’m In It’, ‘Hallelujah’ and ‘Summer Girl’ is among the best run of songs Haim have ever presented; it’s the preceding uneven 40 minutes of variously good, bad and downright ugly songwriting that, unfortunately, lets the side down.