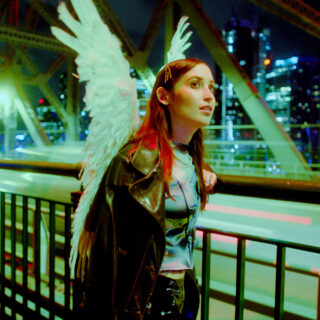 It’s clear that Brisbane’s Harriette Pilbeam, aka Hatchie, has two great musical loves in her life: the fuzzy, distorted aesthetic of ’90s shoegaze, and the euphoric surge of an infectious pop hit. She indulges in these styles in her own music, where she dishes out sugary hooks through a reverb-soaked filter that sounds indebted to acts like Cocteau Twins. Now several years deep into her solo career, the singer-songwriter is unveiling her second LP Giving the World Away, where she marries these influences more successfully than ever.

‘Lights On’ is a dazzling welcome to the record, with the driving rhythm and blissful vocals making it feel like it would be the perfect choice to open one of her live sets with. This energy continues on the irresistibly dreamy ‘This Enchanted’ and ‘The Key’, the latter of which has a thunderous riff that crashes through the chorus, sounding right out of the My Bloody Valentine playbook. But perhaps the most memorable cut of the album comes from lead single ‘Quicksand’, which flaunts Hatchie’s ability to craft an emotive earworm that conjures feelings of bliss, melancholy and nostalgia.

Like a pop princess reworking a Slowdive song, Giving the World Away shows Hatchie flaunting her ability to belt out a great chorus with a pedalboard at her feet. Perhaps she isn’t reinventing the wheel, but she still sounds more confident and catchy than ever before.