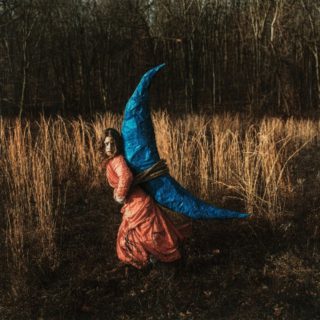 “Ride your pony down the block and tie it up outside the 7-11,” sings Holly Miranda on ‘Golden Spiral’, a slithering, horn-led avant-funk tune that sets the scene for what should be an idiosyncratic and weird glimpse into ‘70s Los Angeles. Instead, Miranda articulates the tale in slightly clumsy fashion: “Next door neighbours making real life sexy movies / Some people call it dirty and some call it art,” she croons, as if having just watched Boogie Nights for the first time.

Horses are the emphasis of ‘Mutual Horse’ – Miranda’s fourth solo record – and why that’s the case remains something of a mystery. Apart from an analogy that compares the collaborative nature of the record (her band is an indie rock tour-de-force that includes My Brightest Diamond’s Shara Nova and TV On The Radio’s Kyp Malone) to a picture of two women stood with a horse adorned on the studio’s walls (‘Mutual Horse’ was scribbled underneath it), it’s an annoying facade for a record that at times is wide-eyed and understatedly beautiful.

‘To Be Loved’ is punchy and breezy; underpinned by whispery beats that let Miranda’s voice soar. ‘All Of The Way’ equally lets Miranda get front-and-centre, her age-old voice cracking beautifully over sublime piano and horns. ‘Do You Recall’ – an off-kilter baroque pop song – occasionally fizzes, but Miranda is left buried under the wig-out that encompasses it. As the record’s effortlessly enjoyable cover of Neil Young’s ‘When Your Lonely Heart Sings’ proves, ‘Mutual Horse’ works best when it’s not hiding behind quirky stories and gives Miranda room to breathe.