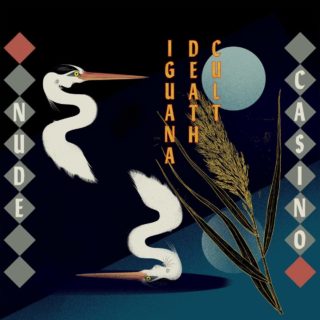 Is it just the ‘iguana’ effect, or have Iguana Death Cult gone a bit… desert rock? The pieces have always been there, of course, but on their second album, Nude Casino, the Rotterdam five-piece have drifted further towards this dusty arena than ever before. If nothing else, the title track and the galloping desperado rhythm of ‘Liquify’ are enough to plant the album firmly in the realm of the cacti.

On Nude Casino there are more high points than not, but the record is book-ended by lulls: the somewhat muted ‘Castles in the Sky’ at the close, and an instrumental prelude to open (we’ve talked about this before, guys – just take us straight into the tunes). In between, though, and to greater success, the band wrestle with capital-B and capital-I Big Ideas. The peak of these is ‘Tuesday’s Lament’, a catchy indie tune more danceable than a five-chapter epic about the difficulties of mortality and faith has any right to be. ‘Half Frysian’ is another high point, it’s spiralling riffs and jerky beat reflecting the combined neurosis and psychosis of the sleep paralysis storyline.

Nude Casino is a counterweight to the band’s previous youthful excess, taking on a more cynical, world-weary outlook. As it turns out, Iguana Death Cult wear it well.