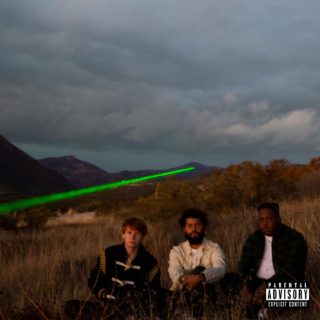 Coming from Arizona, experimental trio Injury Reserve felt free to roam between music scenes as they worked out their own identity. They took lessons from punk, jazz and house music, with their early mixtapes displaying an embrace of old and new hip-hop alike. Following Denzel Curry’s lead in signing to Loma Vista last year, the Phoenix group set about pinning down their diverse influences into something more coherent. The result is a razor sharp and nonconformist debut, elevated by its playful self-awareness.

‘Koruna & Lime’ sets the tone for the LP, introducing Injury Reserve’s wonky yet focused sound. Instagram influencers are ridiculed on ‘Jawbreaker’, before New York rapper Rico Nasty refines the song’s critique of a misogynistic fashion industry. Her presence marks one of several effective collaborations on the album –  JPEGMAFIA and Cakes da Killa are also drafted in to confront a suffocating industrial soundscape on ‘GTFU’.

Injury Reserve is full of nods to internet culture. Coding malfunctions kill off multiple tracks, while ‘QWERTY Interlude’ attracts a virus with the mere mention of Limewire. Every line of ‘Jailbreak the Tesla’ brims with wit as Ritchie With a T remembers hacking an iPod Touch and imagines doing the same to an electric car; Portland rapper Aminé’s guest verse adds further edge to a track that feels urgent and fun.

Riffs on this debut are exciting and varied. The rolling piano that buoys ‘Gravy N Biscuits’ sounds immediately recognisable, while there is a jittery, paranoid quality to the chimes of ‘Wax On’ – a standout track that builds pace subtly before it unfurls. Stepa J. Groggs raps with refreshing clarity on ‘What A Year It’s Been’, granting the album’s final third a chance to turn inward. Injury Reserve have proven their versatility with a debut record that is sometimes manic, sometimes spacious, yet captivating throughout.