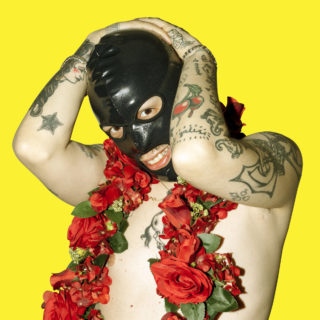 Let’s just get this out of the way first up. Look at that cover art. Just take a good long look at it. Isn’t it compellingly disturbing? Beautifully weird? It’s the glossy sheen on his lower lip that gets under my skin the most. Just be glad that it’s only an inch or so wide; a poster-sized version would be just too much. As an introduction to the pleasingly disorientating world of Turkish weird-pop outfit Jakuzi, though, it’s pretty much perfect.

Forged in Istanbul, this is a band clearly very adept at mixing pop accessibility with just enough weirdness to make things interesting. Their debut record opens with ‘Geriye Dönemiyor’, which is a bold pop song touched with the relentless, slightly trance-inducing groove of good Krautrock, with sparse lyrics (in Turkish) and a hymnal organ refrain.

The slow-paced pop balladry of ‘Her An Ölecek Gibi’ is then reminiscent of nothing so much as a slow Super Furry Animals track, while ‘Bir Düşmanım Var’ reeks of cruise ship croonery, though dodging cheesiness via the escape route of a great saxophone solo. These are pleasingly weird songs; a collection of strange sonic happenings. But ‘Fantezi Müzik’ is an album that pushes through any notion of being merely an oddball curiosity – it’s highly accessible and infectious stuff.