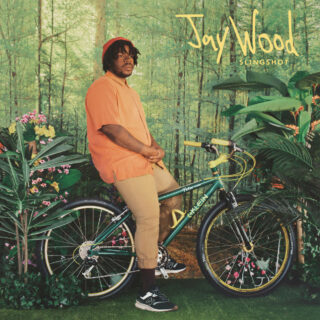 With little over a million people in an area three times larger than the UK, the frosty tundra of Manitoba is an unlikely muse for an artist like JayWood, whose vibrant, genre-bending chronicles of loss, growth, and race discusses social relations with an intensity that’s at odds with the depopulated sparseness of his environment. The Winnipeg songwriter’s music is the antithesis of isolation, and after one listen through Slingshot, you’ll feel like you’ve known him all your life.

Through 12 songs that seamlessly marry funk grooves with ’90s indie and modern hip hop giants, JayWood’s second album abstracts the 28-year-old’s life experiences into a narrative that traverses the prairies, so to speak, without getting lost. Indeed, it’s a concept album that begins with an ending and concludes with a beginning, following the footprints of a self-discovery journey. The catalyst for this – and therefore the album – was the death of Haywood-Smith’s mother. “Well I just wanna thank you / For the best years of my life… There’s some loneliness that follows / But the best is yet to come”, he intones on ‘Thank You’, the unstrained poignancy in his voice shouldered by solicitous jazz harmony.

This lyrical acuity extends to societal fissures such as the murder of George Floyd and the subsequent resurgence of the Black Lives Matter movement. “Instead of burying all these young men in their Sunday best for real / It’s not too late to stop this” is one of many emotive lines from ‘Shine’, the fluorescent trip-hop single featuring guest rapper McKinley Dixon. Deeper cuts such as ‘All Night Long’ evoke Midnite Vultures-era Beck, with synthesisers ping-ponging around a twilit evaluation of climate collapse. Do we need another song about the climate crisis? Yes, and JayWood manages to keep his concurrently urgent and hopeful.

Slingshot eschews the playful jocosity of JayWood’s debut – the Rick and Morty samples and lack of cohesion– in favour of sobriety and subtlety, though his humour remains intact with lines like “It ain’t easy to get high / With all these white folks in power / That’s my Kryptonite”. The sad jangle guitars are also left in the bedroom. And it’s only right that they are—for despite it being recorded at his apartment, Slingshot finds the songwriter stepping out of home, out of Manitoba, and peddling confidently out the other side of a newfound thesis: “Look forward, don’t stop, just grow on”.