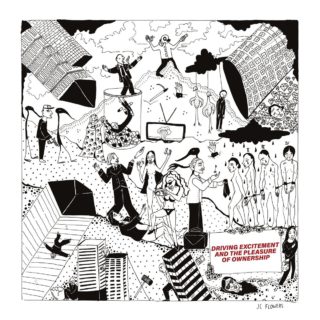 As much as this isn’t an ideal state of affairs, here’s where we are; I strongly get the impression that this fabulously titled debut album from JC Flowers wasn’t really meant to be pored over critically. It’s not that it doesn’t feel cohesive, because there’s this brilliantly consistent core of the key features – vocals flecked with Real Estate reverb, guitars that ground the track even though they sound like they’re going nowhere – but that gut feeling comes more from the against-the-grain flourishes that make ‘Driving Excitement and the Pleasure of Ownership’ what it is.

There’s four inter-track instrumentals – all labelled ‘Jazz Hole’, and perhaps not inaccurately – and they flag up a layer of sonic ambition to this LP that you perhaps wouldn’t pick up on were it all just floating melodies and gorgeously crafted interplay between the acoustic and electric guitars, as comprises so much of the rest of this album. JC Flowers won’t be the last band to – just about – pour too many ideas into their debut album, but that shouldn’t matter: this is still a pop debut wise beyond its years.