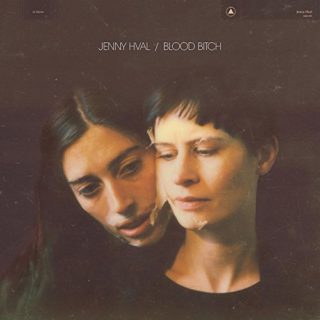 From language to sexuality and gender, Jenny Hval’s previous work sought to confront some of society’s most pressing issues, and her experience of them. Possessed of a skittish, cryptic quality, her writing was full of clever metaphors and imagery. “If you have a child you better learn how to bake / I beckon the cupcake, the huge capitalist clit,” she sang/spoke on ‘Kingsize’ last year, skewering not just the patriarchy’s view of parenting but one of the late aught’s most visible symbols of conspicuous consumption.

On ‘Blood Bitch’, her fourth solo album (and sixth including those under the name Rockettothesky), the abstract has been boiled down to a more focused essence, where emotional reality is confronted head on by the Norwegian artist. “I don’t know who I am, but I’m working on it,” she sings on perhaps her most plainly beautiful song yet, ‘Conceptual Romance’ – a truth that, at some point, concerns  us all.

Ostensibly a concept record involving the investigation of blood (particularly menstrual blood) and the parallel narrative of a female vampire, it also evokes the sense of an artist still wrestling with self-doubt and edging back towards character constructions as a means of making sense of the world and, ultimately, herself.

Rhetorical questions are sprinkled liberally throughout and raked over, like picking an open wound. Intriguing lines of thought open up before ending abruptly, her focus suddenly dragged away. At times, it’s hard to make sense of it all, but I suspect that’s just a clever ploy to mirror the confusion everyone feels in the face of “useless algorithms” and our “land mine of a heart”. It’s also partly a response to two years of touring, of being “jet lagged and playing late night shows”, a disconnection from reality that many musicians struggle with. She says it’s her most fictional and most personal album to date, and it   shows.

Musically, Hval has reverted to the more straightforward style of ‘Innocence Is Kinky’. Gone are the pop melodies and boundary pushing that came and went throughout 2014’s ‘Apocalypse, Girl’; the texture here is far more steady and uniform. Lasse Maraug, with whom she co-produces, is still behind the desk, but the lack of rumble and drama seems very deliberate. The music exists more as a frame for her stream–of–consciousness lyrics, and bustles along gently in the background; there are very few flourishes or noisy interludes that suit her voice (and the message) perfectly. This dream-like state and flatness helps the words land harder, the relationship between them pulled into a tighter focus, shorn of distraction.

Part of the beauty of what Hval does is the way her art takes you to a place you didn’t know existed, but in a way where you don’t notice the journey. Many have confronted the same set of issues with all the nuance of a sledgehammer, but Hval’s gift is to sow seeds of ideas and then leave them to bloom. Her thoughts are opening gambits, not full stops, and are all the more powerful for it. “I want to be just one individual in part of a long and fluid discussion,” she told Loud And Quiet last year, shying away from the role of messiah. ‘Blood Bitch’ finds yet more ways to provoke and question as Hval continues to be an artist streaking ahead on her own.