That Kali Uchis’ second record is almost entirely in the Spanish language represents a calculated gamble. It is, on the on hand, laudable; she’s fully embracing her Colombian roots when the obvious commercial decision would have been to follow-up 2018’s critically-adored (and prophetically-titled) Isolation with another predominantly English record, one that surely would’ve kept her on a firmer footing when it came to the kind of awards nominations, high-profile support slots and radio rotation that she enjoyed last time out. Uchis understands that recording artists face an aural equivalent of what Parasite director Bong Joon-Ho called the “one-inch barrier” of subtitles back in February; when she dropped ‘La Luz’ last month, she acknowledged on Twitter that it was “another day of disappointment for my English speaking fans who do not wish to make the attempt to listen to music in languages they can’t understand.”

Still, as much as she’s on the money about that perennial reluctance in the English-speaking mainstream to engage with foreign-language art, the stand she’s taken with Sin Miedo (del Amor y Otros Demonios) ∞ at least does her the favour of marking her out as a bold decision-maker in a what is currently a fairly risk-averse pop climate. Musically speaking, nothing here is going to alienate fans of Isolation; the lyrics are in Spanish, but the sonic language of Sin Miedo remains one based primarily around the Western blueprint for pop in 2020 – stuttering beats and rich beds of synth are at the core of the record, with the Latin inflection being subtle.

Instead, the dichotomy that comes to define the record is not between English and Spanish or between Uchis’ vocals and those of guest stars like Rico Nasty and PARTYNEXTDOOR, whose contributions are fairly incidental; instead, it’s between high drama and romantic intimacy. The former’s evident in the sweeping strings and trip-hop beat of ‘Vaya Con Dios’, and the brooding, acoustically-driven closer ‘Ángel Sin Cielo’, and the latter comes to define some of the album’s highlights, particularly the woozy ‘Telepatia’ and the turn-of-the-century R&B throwbacks ‘Aguardiente y Limón’ and ‘Quiente Sentirme Bien’. San Miedo has broadened Uchis’ horizons whilst augmenting what made Isolation such a stirring opening statement – she deserves to have her fans clear the language hurdle to join her. 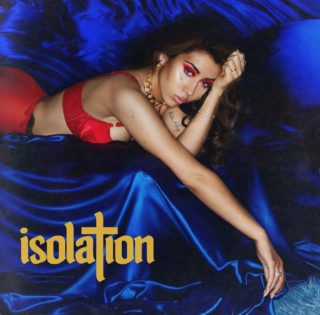