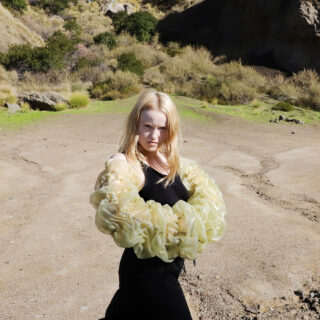 Much has been made about the geographic mobility that has come to define this self-produced debut LP by LA-based electropop songwriter KUČKA – she grew up between the north of England and Australia, before relocating to Los Angeles as an adult – but the more obvious influences shaping her on Wrestling are musical ones: the spirit of past collaborator SOPHIE is palpable throughout, as is the shape-shifting approach to electronica of Flume. Across twelve tracks, she slaloms through a variety of electropop lanes – the downtempo, contemplative ‘Drowning’ is crying out to be sampled on a hip hop record, whilst the fluttering, increasingly distorted synth line that winds it way through ‘Afterparty’, as well as a meandering spoken-word vocal towards the close, provide clear evidence of a willingness to experiment with the electropop blueprint.

Elsewhere, the quietly colourful chaos of ‘Joyride’ feels like a nod to hyperpop, whilst ‘Your World’ takes the opposite tack, shooting for stadium-sized anthemics. There are a lot of ideas being thrown at the wall here and not everything sticks (the hybrid of trap-driven hip hop and synthpop that ‘Eternity’ attempts is a case in point) but it’s not often that debut LPs emerge feeling as fully-realised as this. The myriad different directions in which KUČKA heads across the course of Wrestling add up to what feels like a carefully-crafted sonic aesthetic. A beguiling start.