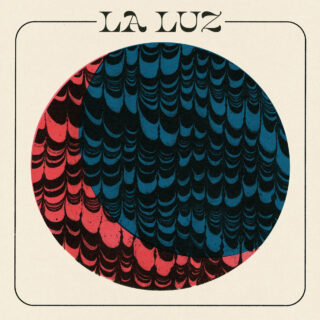 Self-titling an album always feels like a weird move from a band well into the throes of their career. Often the praxis of artists bolstered by a bit of arrogance or a marketing team trying to put a fledgling rockstar back on the map, it seems strange that self-effacing surf-rock trio La Luz would opt for an eponymous title for their fourth studio album.

But, rather than an ego-stroking exercise, La Luz’s appellation is a testament to the emotional and musical affinity that runs deep below the band’s surface. And it’s this affinity that has allowed them to concoct their most intimate work yet. Languid in its composition and more visceral than ever in its lyricism, La Luz’s shimmering, mellow atmosphere feels very much like a sleepy morning waking up next to an old lover, or a Sunday morning walk through the park with a new one.

Lethargic, velvety ballads like ‘Lazy Eyes and Dune’ and ‘Oh, Blue’ – the latter of which is underpinned by a slackened and slowed down version of the trio’s usual sunny ‘doo-wops’ that feels a little bit like picking up a vinyl record and putting it on the turntable at the wrong speed – are sprawling, private pastiches of the inner workings of songwriter Shana Cleveland’s brain. Other moments are more straightforward: the twinkly instrumentals on rose-tinted track ‘Here on Earth’ and the jangling vintage pop rhythms of ‘I Won’t Hesitate’ flutter like elemental love songs.

Meanwhile, the album’s slightly more percussive flashs amp up the psychedelia. ‘Metal Man’ is a feverish symphony of convulsive reverb, ascending drum beats and swirling synths that knot themselves together like a tangle of bindweed in an untended garden, while the soft and lackadaisical ‘Watching Cartoons’ toys with carefully woven, lush harmonies that drift over dozy jazz-infused psych rhythms, with the occasional twangy guitar riff serving as a veiled reminder of the band’s surfier roots.

In many ways this new record feels like a subtle departure from the trio’s token brand of summery surf-noir. Beachy riffs are displaced by spectral synths and fuzzy, lo-fi production values hijacked by traipsing, catatonic instrumentals that feel like a far cry from the pool-party-chic carved out on Weirdo Shrine and Floating Features. But for all its stylistic digressions, La Luz – with its lyrical intricacies and syrupy sound – feels, perhaps, like the most authentic representation of this band yet.