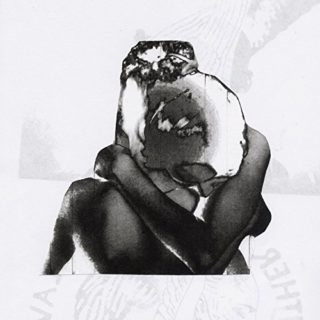 No one can accuse LUH of not having much to say. The Amsterdam-based duo, comprised of Dutch video artist turned vocalist Ebony Hoorn, and former Wu Lyf frontman Ellery Roberts, release their debut album under the acronym for ‘Lost Under Heaven’ this month, and it comes as a gargled rebuke to the postmodern age. With the glittering career of Roberts’ former band cut short, it seems he has unfinished business and the genre-bending music on ‘Spiritual Songs For Lovers To Sing’ makes for as confident a debut as you’ll find.

Since their first releases at the tail end of last year, you got the distinct impression that LUH fancied themselves as something more than just a band. Most notable was their initial press release-turned manifesto – a poetic rambling placing their music on a pedestal and imbuing it with political significance.

Viewing the world through Pynchon-borrowed binoculars, it spoke of being “beyond disillusionment …with the utter fallacy of the world built around us”, of censorship and bullshit and a false sense of “freedumb” turning heads away from a human engineered apocalypse. A “dystopian present culturally normalised”, with LUH standing in opposition. Heavy stuff, then, and best not tackled by saccharine three-minute pop songs, which this certainly ain’t. Instead, LUH lean towards the cacophonous and bleak with only a few moments of peaceful respite, tackling heavy topics with a heavy approach, Roberts’ barking, strained vocal (marmite or an acquired taste, you decide) making this a challenging listen.

‘Beneath The Concrete’ is an intense piece of dark electronica sounding a bit like it was produced by the Haxan Cloak on a remote island off the east coast of England (which it was) while ‘Someday Come’ starts out with a synth-pop, Future Islands influence, only set in a time when all the islands have turned to dust and ash. The track ends with a classical string section only to be followed up by the non-sequitur post-dubstep of ‘$oro’, complete with a hint of auto-tune and an RnB style that could feasibly see some high-profile collabs come calling.

It’s a confident and occasionally confrontational record, though; one that some will undoubtedly accuse of conceitedness or taking itself too seriously. Despite the manifesto’s call to “navigate this world with laughter and light”, there is little on show here, but what there is, is unquestionable sincerity. Who knows how long LUH will stick around for, but it’s fair to say they’ve got a few things off their chest.