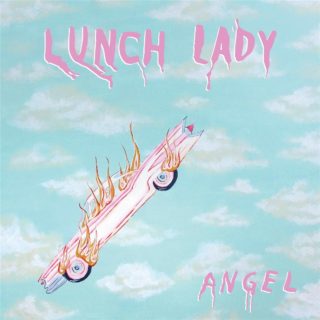 Lunch Lady are British post-punk devotees. Formed through the Los Angeles DIY scene, the band open their debut with a nod to Joy Division and make sure to pay their respects to Siouxsie And The Banshees before long. However, lyricist Rachel Birke’s strong narrative focus helps Lunch Lady achieve more than emulation, as the punk group use those 1980s influences to take stock of their own Californian surroundings.

The group revel in character-heavy vignettes, most notably on the snarling ‘Dolores’ – a sinister track inspired by the Stephen King-adapted horror film of the same name. They also refuse to settle into a rhythm, often caught between romanticising and deconstructing the past on songs like ‘My Dead Dog’.

Angel features 12 tracks (only 2 of which running over 3 minutes) that seem to capture a band still carving out their musical identity. It’s at its playful best, however, when the pace relents and Birke’s lyrics are granted space to set up some impressively cinematic scenes. ‘Preacher Man’ features violins and melancholic verses that broaden the album’s scope, before ‘Deeper’ and its instrumental prelude end the album on a reverberating note.