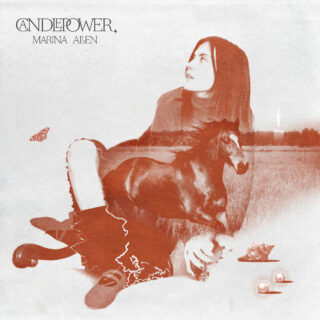 Through cartoonish accidents with flurries of red platform shoes and bright purple hair, bustling warehouses in outer Los Angeles turned into a diorama of Discipline and Beat-era Robert Fripp, colliding head-on with the absurd playfulness of Tom Tom Club, by way of Louise Chicoine and her alter-ego, Banny Grove – your favourite artist’s favourite artist’s favourite artist. Among those locked into Chicoine’s magically illogical performances of vulnerability in costume was Marina Allen, whose own debut collection now openly owes its debts, starting with the gorgeously insular yet entirely inspired ‘Oh Louise’ – a compendium of inner strength willing to extend its thanks.

Tapping in at under 20 minutes, Candlepower is quick around the racecourse but still refuses to find a shortcut. The comparisons to Karen Carpenter, Laura Nyro and Joni Mitchell are unavoidable at first, but a namecheck of Hejira later and her world becomes instantly less recognisable, harbouring a devilish innocence within her modern mythology, that weaves a thoroughly unique pattern. ‘Sleeper Train’, for example, starts as a purposely elemental, analogue and wilderness-gazing folk paean, but when “the rain falls down a refrain” and the band is joined by the soft echoes of electric guitar, you’re unsure whether it’ll launch into the octaves-apart gymnastic Frippery of ‘Hammond Song’-era Roches, or claim the simple anti-poetic lyrical rites that make their resonance so confounding. It of course does neither.

The joy in Candlepower is instead finding the seven songs nodding to one another when your back’s turned like The Night the Toys Came to Life. The spiraling, disorientating danger of ‘Belong Here’ – “California is on fire, New York is underwater” – embedded within a psychic chime more similar to label-mates Vanishing Twin than any bijou singer-songwriter trope is placated by album highlight ‘Original Goodness’ – “maybe between worlds I could show you all my letters… how I can hold my breath under water.” Were you not listening? Through the clumsiest of strums and black cats in dark rooms, Allen becomes a more alluring puppeteer on every listen. By the end of 20 minutes, hours could have passed.