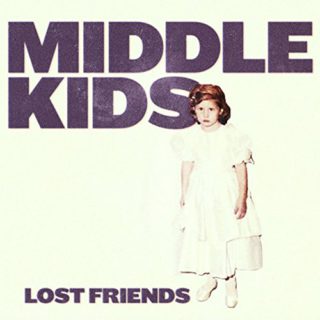 Debut records rarely feel as fully-fledged as this one from Middle Kids. The Australian trio – comprised of singer-guitarist Hannah Joy, her husband Tim Fitz on bass and Harry Day on drums – already have five million Spotify streams for a single song under their belts for ‘Edge of Town’ after Elton John played it on his Beats 1 show last year, although you sense that the confidence that flows through ‘Lost Friends’ is less to do with early successes and more down to them having a vice-like handle on their influences.

They’re taking their cues exclusively from America, but there’s diversity within that; ‘Edge of Town’ and ‘Maryland’ are both in Ryan Adams’ alt-country vein, albeit with noisier guitars, and both opener ‘Bought It’ and the bouncy ‘Please’ recall the heyday of Saddle Creek – Rilo Kiley, in particular, spring to mind.

Elsewhere, the guitars are drenched in reverb on ‘Never Start’, and the panoramic ‘On My Knees’ might be the album’s most experimental moment, with Joy reeling off quickfire verses against guitars that flit between melodic chiming and freewheeling riffery. It’s one of a couple of moments on ‘Lost Friends’ when you can hear Middle Kids reaching for something a little more epic in scale; the album’s closer, ‘So Long Farewell I’m Gone’ does similar, with a powerhouse vocal turn from Joy. This is an assured first full-length from a band that have already carved out a striking sonic identity; the more impressionistic moments, though, suggest they still have plenty of untapped potential.