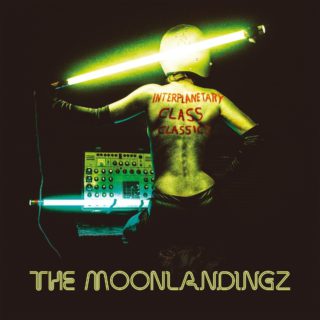 Where to begin with The Moonlandingz? Originally conceived as the object of Maxine Peake’s obsession for The Eccentronic Research Council’s superlative ‘Johnny Rocket’ album, the once-fictional band has broken into the real world, Roger Rabbit-style.

It helps that ‘Interplanetary Class Classics’ far surpasses the band’s original brief of “cosmic synth Krautabilly group, doing fuzzy Joe Meek-style pop.” With as much regard for genre boundaries as the fourth wall, The Moonlandingz’ debut has shades of Brill Building balladry, The Glitter Band, Suicide, The Cramps and even nineties cult icons Earl Brutus.

Uncharitable ears might find the band’s comedy goth stylings too similar to Mighty Boosh musical interludes, but their best songs perfectly straddle that elusive line between ridiculous and sublime. The album’s lewd and lurid highlight struts like Sparks in the prime of their seventies pomp, with guest vocals from the actual cowboy from the Village People. Its title? ‘Glory Hole’.

With such a smash-and-grab approach to style, and without a concept to hold it together like ‘Johnny Rocket’, it’s still a strikingly coherent listen. If there’s any point of comparison to be made, it’s with Jarvis Cocker’s short-lived eyebrow-raising glam nightmare duo Relaxed Muscle. Are they for real? Are they serious? Does it even matter? The answer is no, and ‘Interplanetary Class Classics’ is all the better for it.