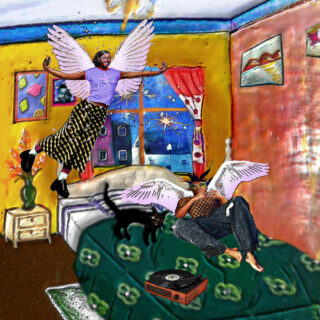 Ever-evolving, explorative poet, artist and musician Mykki Blanco’s fourth studio album Stay Close To Music opens with the swirling ‘Pink Diamond Bezel’, that sees the Californian musician (armed with producer and multi-instrumentalist FaltyDL) fuse bubbling hip hop with gurgles of grunge, as multi-layered vocals intertwine themselves around each other, setting the precedent for the godly quality that pervades Blanco’s work.

The soft and poetic ‘Steps’, featuring lauded multi-hyphenates Saul Williams and MNEK, follows in similar style, and that’s the general consensus with Blanco’s new record – a twisted and delicate fusion of experimental hip hop, unbridled in its approach to muddling sounds together.

‘French Lessons’, featuring Mercury Prize-winning ANOHNI and New York singer/cellist Kelsey Lu, is one of the album’s standout moments, a gentle, wandering track that instrumentally isn’t far off from the cosmic synth-funk of Kool and The Gang’s ‘Summer Madness’, or André 3000’s ’00s collaborations with Kelis and Gwen Stefani. Yet Stay Close To Music’s most powerful track comes in the form of the mystical dark electronica of ‘Your Love Was A Gift’, featuring NYC artist Dianna Gordon, who seems to effortlessly, and thus a little unfortunately, stand out over Blanco on the track.

R.E.M. frontman Michael Stipe’s ghostly feature on the repetitive, trance-inducing ‘Family Ties’ is another grooving remedy akin to the more mellow work of Gorillaz, but it is actually the point in which the album starts to falter. ’Your Feminism Is Not My Feminism’, featuring LA musician/DJ Ah-Mer-Ah-Su, had a clear vision of what it wanted to achieve, but fails in its trite and obvious lyricism. On this track, and the latter half of the album, Stay Close To Music lulls into a rhythm that becomes tedious and undiversified, ultimately losing itself – which is a shame given the inherent strength and power of Blanco’s artistry.