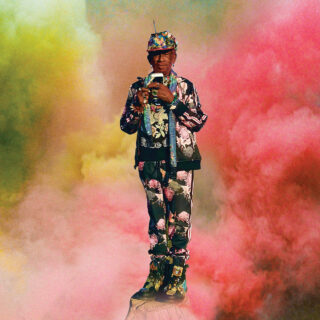 There have been many moving, eloquent tributes to the visionary that that was Lee “Scratch” Perry since his passing in August, written by people who knew him and his genius far more intimately than this writer could even begin to pretend to. So I’ll leave that to those people. Suffice to say that as one of Perry’s final projects, this collaboration with Canadian experimentalists New Age Doom – whose excellent, transporting album Himalayan Dream Techno was an under-the-radar smash last year – is a testament to the boundless creativity and restlessness of the great man. Combining vast sheets of bass and drone with the kinds of tape echo and plate reverb that haunt so much of the music that Perry made, inspired or subverted, each track here is a loping, seething juggernaut, over which Perry’s voice is given ample room to preach, incant, command and conduct.

Hints of drone metal and free jazz burn at the edges of the record, the spectral gust of dub turned inside out to maximalist ends. 12-minute closer ‘Conquer The Sin’ is a macro-microcosm of the record at large, its bassy underbelly pulling at the leash of its prog guitar line beautifully as Perry’s vocals pirouette high above. Astonishing stuff – RIP to a real one.