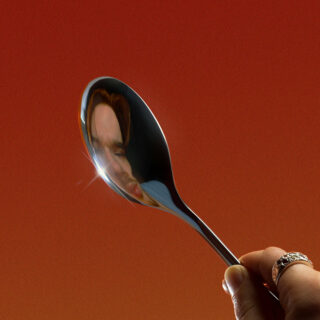 Breathe Deep, the brilliant 2020 debut album from Oscar Jerome, is frequently held up as a shining example of the wave of new acts exploding out of London’s contemporary jazz scene. Now that, several years later, the dust of this initial explosion has settled, it’s fascinating to survey how accessible so much of this scene’s output is. Jerome is at the forefront of this nu-nu-jazz style, crafting soulful, pop-leaning tracks that meld jazz instrumentation with R&B melodies, afrobeat rhythms and indie rock emotions.

Breathe Deep felt as though it had been fine-tuned for maximum approachability, and Jerome’s latest The Spoon is no less likeable, but it’s also a more effortless and relaxed collection. Lead single ‘Berlin 1’ encapsulates this subtle shift. The sort of uptempo track upon which Jerome would have previously layered earworm choruses and polyrhythmic drums, here he opts for a more flu structure and linear rhythms adorned with minimal percussion. The other ‘lively’ tracks on The Spoon, the funky centrepieces ‘Channel Your Anger’ and ‘Feet Down South’, are similar in shape to older Jerome cuts, both are again far more patient than the hyperactive urgency he erred towards on earlier releases.

Taking this relaxed approach is a smart choice. Many acts load their follow-ups to successful debuts with more of everything that made the previous one work. Instead, Jerome plays it cool and gently pares things back, in the process losing none of what made him so acclaimed in the first place.