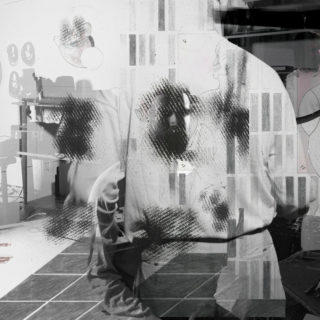 In the last three years, Crack Cloud’s Daniel Robertson has lived a life of unrelenting noise and oscillation. He’s toured extensively with Crack Cloud and carried out harm-reduction work in overdose prevention sites and low-barrier shelters, all while grieving the death of his grandfather and mourning friends lost to overdoses. For Robertson, the birth of his solo project, Peace Chord, and the recording of his eponymous debut album in the shed behind the house he shares with his bandmates in Vancouver, marked a much-needed change of pace. ‘In the stillness of that space,’ he explains, ‘I was afforded time to reflect on the thoughts and experiences that had gone unseen.’ He goes on: ‘While I was writing, I was also building a Buchla 200 synthesizer, learning to weave on a loom, keeping my hands busy. Like treading water, providing buoyancy to process and meditate on these experiences. Weaving a spiritual lens through which I can interpret what I’ve seen.’

The seven tracks that make up Peace Chord, drawn together using vintage synthesisers, an upright piano and minimalist vocals, are testament to Robertson’s musical and spiritual transition from the communal grandiosity of Crack Cloud to the stillness of individual introspection. While ‘Juno’ is a modest piano piece named for the family dog that lay by his feet as he recorded the song, ‘Memo’ is an ode to death and the profound act of memorialisation, made haunting by the paired twinkle of the artist’s keys and the whisper of his vocals. The album closes with ‘Crescent of Sun,’ a goosebump-inducing, four-and-a-half-minute memorial track written for Robertson’s friend Chris, who sadly passed away of an overdose after years of sobriety. At times this album, deeply vulnerable as it is, makes for difficult listening, yet its revelatory power makes it required listening.